Wise people adapt to the changing conditions – be it marriage then!

Marriages are made in heaven and arranged on the earth they say. But since the world is paused for an indefinite period of time, finding a soul mate has become a tough task. With the novel coronavirus wrecking havoc in the world, engagements and marriages are some events that have either gone into the backburner or have been planned for a sunny day! But not all is lost yet. With the world literally running on virtual mode, major life events like weddings, too, have happily taken the same route.

In a country like India, where marriage functions are associated with the word “grand”, a virtual wedding – with not a single relative in attendance, no lavish ambiances to set up, no musical sangeet and mehndi functions to dance at, and no delicious food to satiate the palate – it has become an unacceptable fact. Despite all the lows, people are still opting for online marriages and are forthcoming in their approach to the new subject. Thankfully, matrimonial websites, too, are now coming to the rescue of people, who wish to marry inspite of these gloomy times, and are playing cupid in the lives of those wanting to settle down and help them to execute their lives important decision into reality.

As per a report published online, India’s two leading matrimonial websites like Shaadi.com and Bharat Matrimony  have benefitted the most out of this pandemic. With 20 to 30 percent increase in registrations respectively, these websites have become the messiah for individuals wanting to tie the knot amid the nationwide lockdown. With their premium memberships now made free of cost, it is but natural that two adults wanting to get hitched would definitely make good use of their account on these websites.

Right from the planning to the execution of a major event in a person’s life, such wedding portals are coming forward to get two individuals hitched forever. A Delhi based couple – Kirti Agarwal & Avinash Singh Bagri  in touch with matrimonial website Shaadi.com. & were supposed to get married on April 14, 2020, but the nationwide lockdown getting extended by another two weeks, their marriage plans seemed to go out of the window. But luckily, the matrimonial website had it all covered. With wedding live streamed on zoom, relatives got to ‘virtually’ attend the sangeet and mehndi ceremonies via video call; brides got their make-up tutorials online from their artists and even sweets were distributed to relatives through online food apps! With the click of a button, elaborate wedding functions became simplified! 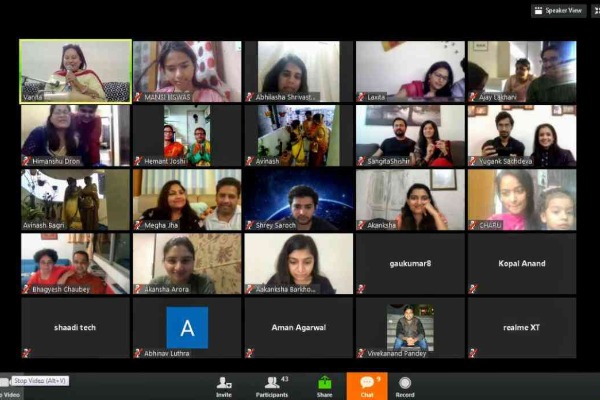 Vanita Sharma, a wedding singer, sang popular Bollywood songs from her home in Faridabad in Haryana. “I am used to singing live, so it was a bit awkward at first. But when I saw that the guests were enjoying, it bolstered my confidence,” said Sharma. “I sang Kajra Mohabbat Waala especially for the couple’s parents.“

‘Wedding from home’ has now become the new mantra for marriage hopefuls; and like every other activity that we have easy access to from the confines of our homes, marriages, too, are being performed in the same way. In certain states of the USA,  a wedding ceremony is legalized only if the bride and groom are present for the ceremony, virtual weddings are getting due recognition. Grooms can now avoid mass gatherings and save a little extra on the cakes and shakes and still get to kiss the bride!

Singapore is another such country where the parliament passed a bill that allowed couples the option to get married during the pandemic virtually via live video links. What’s more better, there is no need of bride and the grrom to be at the same loction during the wedding, as long they are both physically in the country. The solemnisation will be conducted in the virtual presence of their witnesses.

China’s Ma Jialun and Zhang Yitong is another such couple who opted for virtual wedding on May 1. The couple live streamed their nuptial vows to more than 100,000 strangers.

Apps like Zoom, Google Duo and WhatsApp are also providing respite to relatives, who can’t make it to the wedding in person, by live streaming the entire ceremony on their tablets or phones. In times like these, where normalcy is not expected anytime sooner, pocket-friendly weddings have started to become the new norm. Two consenting adults can finally get to be with each other, bound by matrimonial vows and covered under all the laws of the land. While virtual weddings do not pinch the pockets, it is a little saddening that an extended family could no longer come together to attend important event. On the brighter side, if this trend continues, virtual weddings will soon be a welcome change and might catch up momentum even after the world goes back to normal!