It’s not for the first time that Samantha Markle is publicly embarrassing her half-sister Meghan, now, the Duchess of Sussex on social media.This time Samantha Markle lashed out Meghan Markle and Prince Harry after Kensington Palace released their Christmas card.

In the Christmas card released by Kensignton Palace, Meghan and Harry are gazing at a fireworks  with their back turned. This picture is from their wedding reception at Frogmore House on 19th May.

The Duke and Duchess of Sussex are delighted to share a new photograph from their Wedding Reception at Frogmore House on 19th May. The photograph, which was taken by photographer Chris Allerton, features on Their Royal Highnesses’ Christmas card this year.

Samantha Markle accused Meghan if turning back on Christmas card means “turning her back on her family”. Here is what Samantha slammed Meghan in her tweet saying –

“Interesting that the Duke and Duchess of Sussex have their backs turned. Is this towards the world or just the Ragland and Markle family? 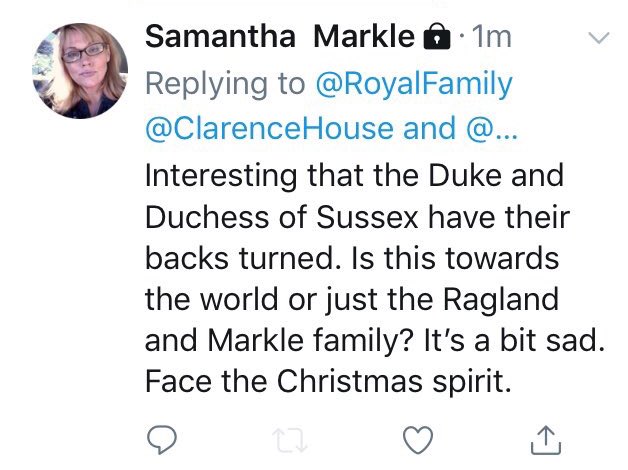 She later added: “It’s incredibly rude to turn your back in a Christmas photo that is meant to share warmth and good wishes with the world. Those that criticize me for pointing out the truth, need to get that brown stuff off their noses. I hear the world’s smallest violin playing.” 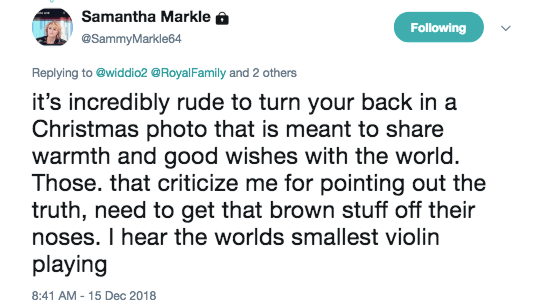 Markle and family are tiffed with Meghan Markle as she did not even invite them on her wedding to Prince Harry. Her father Thomas Markle haven’t seen his daughter Meghan since her wedding. Meghan’s only family member to attend her big day was mother Doria Ragland.

Samantha had earlier called out Meghan as ‘Liar’ during her speech at Fiji University. (Read: Samantha Markle Calls Meghan Markle A ‘Liar’ After Her First Royal Speech At Fiji University)