Meghan Markle’s half sister Samantha Markle calls out Duchess Meghan for lying about her education fees at her first royal speech in Fiji.

Four months pregnant Meghan Markle is accused by her half sister Samantha Markle in her now deleted twitter series. Samantha slammed Meghan for telling outrageous lies about her education fees at her first royal speech in Fiji.

Samantha tweeted that Meghan is a “liar” who claimed in her speech that she self funded her education fees using scholarships and financial aid programs.

The Duchess of Sussex may have won fans for her first royal speech about girls at University of the South Pacific’s campus in Fiji yesterday, but her half sister Samatha, 57, called out Meghan a pure ‘liar’ in her deleted tweet.

Samantha wrote in her furious filled tweet that her dad Thomas Markle had paid the tuition fees of Meghan. She is also claimed that there are receipts to prove it. 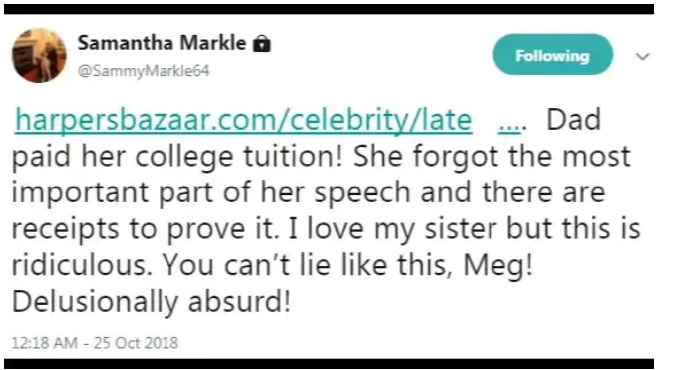 In her further series of tweet Samantha asked Meghan for proof of her scholarships and financial aid she is talking about, tagging the official Kensington Palace Twitter page in her accusations. 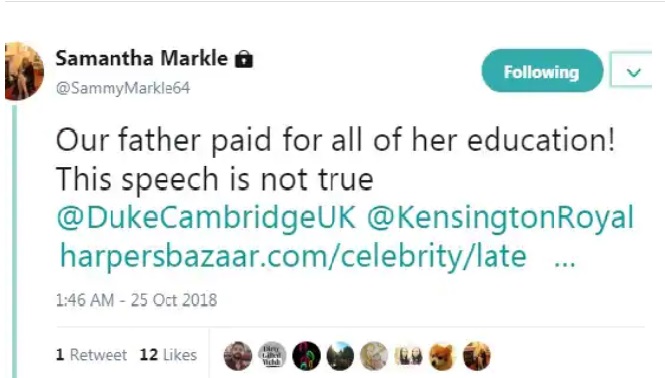 Her angry tweet now deleted also listed all the educational institution their father had paid for — claiming he financed Meghan’s education at the Little Red School House, Immaculate Heart, and Northwestern University — before demanding “proof” of her scholarships.

“Proof, let’s see proof of scholarships and grants. Dad paid for her education, all of it. If she worked at all, it was for extra shoe money and party money,” Samantha wrote.

Meghan Markle’s father Thomas Markle, 74, told the mail on Sunday that he paid Meghan’s $41,980-a-year tuition after winning $1.586 million on a lottery.

“When Meghan was 11, she moved back in with me up until she was 17 and went to college,” he told the Daily Mail last year.

“I was having my good years then, making good money, and could afford to give her the best, with a good school, good education, good home. She became the woman that she is today thanks to everything I did for her.”

Mr Markle described himself as a a proud man, who has never asked his daughter for a penny, despite suffering financial setbacks over the years and losing the vast majority of his lottery winnings in a bad business deal.

It was Meghan’s first ever speech in Fiji yesterday after her wedding with Prince Harry talking about educating girl child. Meghan addressed the crowd that she understood the “personal feeling of pride and excitement” that came with attending university.

“I am also fully aware of the challenges of being able to afford this level of schooling for many people around the world — myself included,” she said.

“It was through scholarships, financial aid programs and work-study where my earnings from a job on campus went directly towards my tuition — that I was able to attend university. And, without question, it was worth every effort.”

Meghan Markle’s speech seems completely different and opposite of what she claims after her half sister Samatha accused her of lying about her education fees. It’s not the first time that the Samantha has went outrageous over Meghan, but this time she is also talking about all the proof her father has funding Meghan’s education.

Prince Harry, 34, and Meghan Markle, 36, are currently on a tour of Australia and the South Pacific region.