King of Khan’s, Shah Rukh Khan left no stone unturned for the promotions of Raees movie. From Kapil Sharma Show to #RaesOnRail, Dubai promotions to meeting his fan who is shoe maker, SRK did a fantastic promotion of his movie. This fetched him a good score at box office. Raees, which was released on 25th Jan is doing great business at box office. Beside SRK, audience also loved the role of Nawazuddin Siddiqui.

SRK and his movie received loads of love and appreciation from the public and fan followers. Did we tell you that SRK’s recent visit in Pune(after Raees movie release) had gathered more crowd than Obama and Donald Trump’s inaugural ceremony. Funny, isn’t it!!? Here is the pic of SRK with the Pune crowd –

It was great seeing you all… Thank you Pune!

Thank u Pune. Symbiosis students & all at the Seasons mall…and all following me on the roads. Go for Raees now!

With the overwhelmed success of movie and love from audience, Shah Rukh Khan along with his little cutie pie AbRam visited at the Golden Temple, Amritsar to seek blessings. SRK tweeted this adorable photo of duo with the caption – “At the Sri Darbar Sahib. Peace and love and all feelings beautiful. Thank u Amritsar.”

At the Sri Darbar Sahib. Peace and love and all feelings beautiful. Thank u Amritsar. pic.twitter.com/gB53l1HJvK 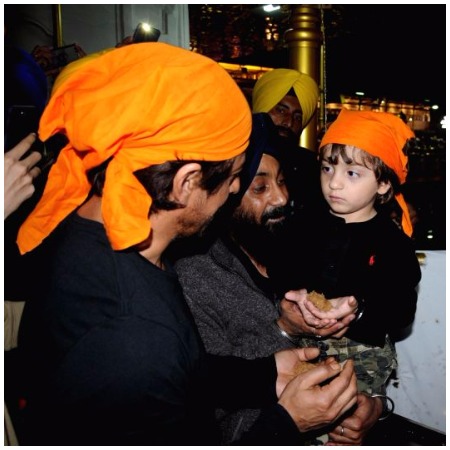 Cannot get over the gushy feeling we have for the handsome father-son’s bonding.