Bollywood superstar Shah Rukh Khan, who has been promoting his upcoming film Raees day and night, recently did a train journey from Mumbai to Delhi as a part of the promotional campaign. Yesterday, Shah Rukh Khan along with his team and journalists travelled from Mumbai to Delhi via August Kranti Express but the journey turned into a tragedy when a man died during a stampede at Vadodara railway station platform.

A massive crowd turned up as Shah Rukh Khan reached Vadodara railway station at around 10:30 PM. Fans were seen in large numbers who arrived only to catch a glimpse of their favorite star. The train halted for almost 10 minutes but things turned out to be unfortunate as one of Vadodara resident who arrived at the station with his wife and kids, died in the stampede. As per media reports, SRK did no deboard the train but still, the crowd went uncontrolled. 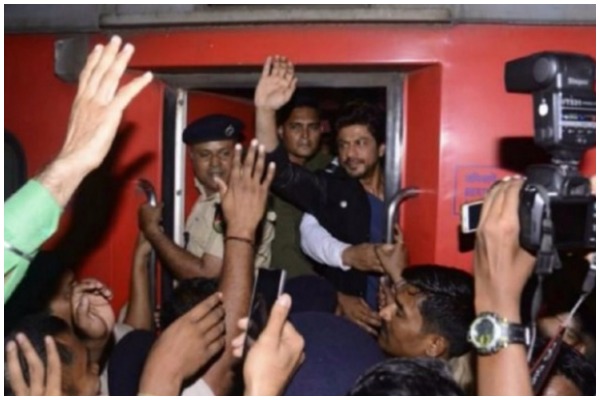 As soon as the train left the station, people started rushing here and there, during which one person lost his life while two policemen injured. The deceased, Farid Khan Pathan was injured and felt suffocation during the stampeded after which he suffered a heart attack. He was immediately taken to the hospital but he was declared dead on arrival. The person who died also happens to be the uncle of a journalist who was travelling with Shah Rukh Khan in the same train. The female journalist who expected an exciting journey with SRK turned out to be tragic. Many colleagues of the female journalist are currently with her in Vadodara and reportedly fueral will take place today. Truly sad!

SRK, who arrived at Hazrat Nizamuddin railway station in Delhi early morning on Tuesday, expressed his condolences over the unfortunate incident. The actor said, “What happened at Vadodara platform is unfortunate. My prayers are with the family of the deceased.”

READ: Watch: Deepika Padukone’s Candid Confessions of Borrowing Rs.10,000 from Her Parents To Having Babies With Vin Diesel On The Ellen DeGeneres Show!