This season of Koffee With Karan had a spectacular start and witnessed some unexpected guests on the show. The filmmaker came up with stronger coffee, more masala, and candid guests but last night’s episode was by far one of the best episodes. Bollywood turned Hollywood actress Priyanka Chopra was seen candid at her best. The actress took over the couch all alone and did not hesitate even once before making some personal revelations.

Let’s take a look at the top most happening moments from the last night episode! Here’s how the episode unfolded:

On her first audition: Priyanka Chopra was quite bold enough with her confessions as she sat on the couch for Koffee With Karan. The actress never gave any audition to become a Bollywood actress but she had to give one for her Hollywood show, Quantico. Priyanka revealed that she was quite nervous during her first audition and called herself an idiot for not knowing anything about how it was done.

On facing racism: Karan Johar asked Priyanka Chopra if she has faced racism which is a global phenomenon. Addressing it as a first world problem, Priyanka shared an incident that during her journey on a flight from Europe to New York, the air host directed her to the loo at the back assuming she was flying economy.

READ: Koffee With Karan 5: TOP 5 Weird and Bold Confessions Made By Varun Dhawan and Arjun Kapoor

Comparison between Salman Khan and The Rock: When asked about her Baywatch co-star Dwayne Johnson aka The Rock, Priyanka Chopra said that he is a very nice guy with manners and even when her mom Madhu Chopra came on sets, he pulled a chair for her mom. When Karan asked her for a parallel in Bollywood, Priyanka didn’t think once and said Dwayne is very much like Salman Khan who loves to spend time with lots of people. 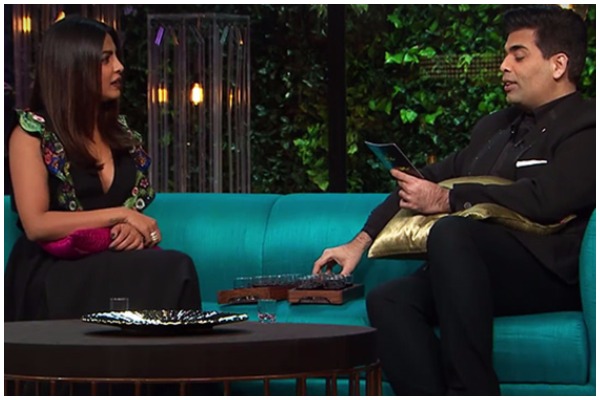 On guys being upfront in America:  Priyanka said that boys In India are very much cautious and be careful while hitting on a girl but in America, guys are very upfront and directly ask you out for dinner despite not knowing you, adding that she found it very awkward. She said, “Over there, men ask you straight up, ‘I’m free tomorrow night, let’s go out for dinner’. And I’m like ‘wow man, I don’t even know you.’

Koffee shots segment: Okay, so this time, Priyanka had Koffee shots and not tequila!  Well, Karan Johar too played Koffee shots segment with Priyanka Chopra and made some wild revelations. During the fun segment, Priyanka revealed that she has kissed an ex, had phone s*x and has never indulged in role play. The actress refrained talking about some things and hoped that her mother does not watch this show.

On being single: Priyanka said, “When there is a ring on the finger, the world will know. I believe you are single until you are married.” She further added, “Single or Married, I’ll work till my fans love me.”

Three words for her hater: The best part of the episode was when Karan Johar asked her three words she would like to say to her Twitter haters. PeeCee said, “One starts with F, other with S and the last one is Get Lost.”

That was one hell episode!  Don’t you think?