Ever since Shahid Kapoor tied the knot and broke millions of hearts, there has been a curiosity amongst us mortals to know Mira Rajput, who bagged the heart of the most eligible bachelor of Bollywood. This time, Karan Johar has managed to bring her on the couch, and we cannot be more thankful. This New Year will start with a bang as we will be witnessing Shahid and Mira on the couch, and from taking a dig at each other to making revelations about each other, the two seem to be doing all. 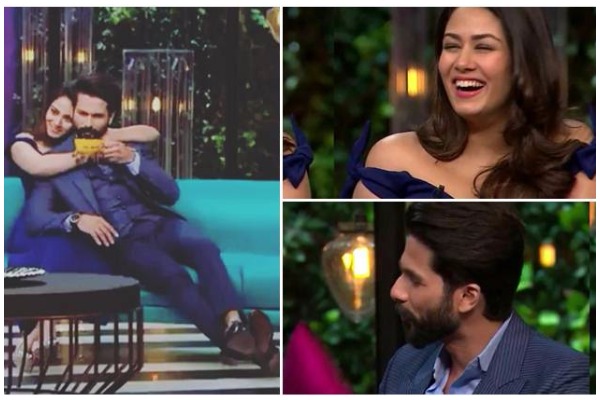 The latest promos of the upcoming episode of ‘Koffee With Karan 5’, which coincidentally falls on January 1, are out, and we just can’t get enough of the playful camaraderie that Mr. and Mrs. Shahid Kapoor share with each other. From loving caresses to friendly banters, to stolen glances, everything is visible between these two.

Take a look at the promos and get ready for an explosive episode on the first day of New Year.

And here’s another one.

Shahid and Mira have recently become proud parents of a baby girl who they have lovingly named Misha. One look at Mira and we can say that being a mother has brought about a glow to her face. Parenthood is suiting these two really well.

0 0 0
Previous : LOL! Did You Know That Anushka Sharma Is Deaf from One Side?
Next : The Trailer of Nawazuddin Siddiqui’s ‘Haramkhor’ Finds Comedy in a Dark Love Story