Serena Williams behaviour at US Open was really unacceptable when she called out umpire Carlos Ramos a thief and demanded an apology from him. She even ruined 20-year-old Japanese US Open winner Naomi Osaka’s big day.

It is disheartening to see an international starlike Serena Williams to exhibit such poor sportsmanship. Serena has been fined a total of USD 17,000 for violation of three codes during the final which will be deducted from her runner-up’s prize money of USD 1.85 million. However, this not all that will be remembered from Serena Williams’ match versus Naomi Osaka in the U.S. Open Finals.

During the U.S Open Final Serena displayed poor sportsmanship by violating three codes. The tournament’s referee docked Williams of UDS 10,000 for verbally abusing umpire Carlos Ramos, USD 4,000 for being warned for coaching, and USD 3,000 for breaking her racket.

Serena has lost it. She didn't bring it today, the ref was just doing his job, and now she's turned it into an * for Osaka, which it shouldn't be. #USopen pic.twitter.com/Pnn75nMlx4

"You stole a point from me. You're a thief too" ??? #USopen pic.twitter.com/WrztF9CdsG

Mouratoglou admitted to ESPN that he coached.

Thus, the warning was correct by Ramos.

Then, racket abuse warning was indisputable.

Williams felt entitled to having coaching warning retracted, which never happens. So she ranted abusively, and got a third warning.

Serena Williams stole the limelight from winner Haitian-Japanese player Naomi Osaka by first breaking her racket and then verbally abusing the umpire Carlos Ramos by calling him a thief and a liar. If this is not all Serena even heatedly stated to the umpire, “You owe me an apology,”, a bit hypocritical isn’t it? This not only brought all the limelight on Serena Williams but also stole Naomi Osaka’s crowning moment. 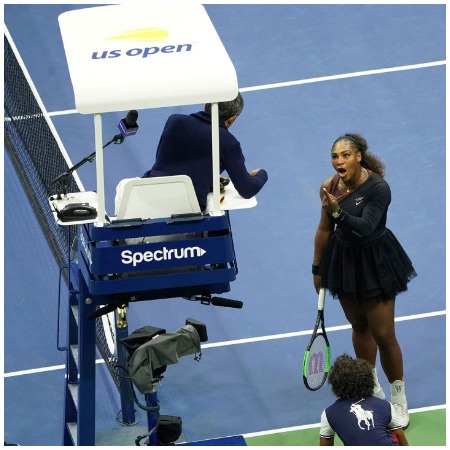 For 20-year-old Naomi Osaka, who is 16 years Williams’ junior, who has idolized Serena Williams, post this encounter with her idol on the other side of the net, we are sure Serena is not the heroine that Naomi imagined to be.

Now why did Serena Williams throw a temper tantrum instead of getting on with the match gracefully?

Is it because she is not used to losing to someone significantly younger than her? Is it because umpire Carlos Ramos called out Serena for her behaviour and violations? Is it because if Serena would have won the U.S Open final she would have become the first person to win seven U.S. Open titles and also the first mother to do so?

Clearly, seeing Naomi Osaka win the title she aspired for made Serena throw a tantrum.

When Naomi bowed down in front of Serena to show her respect, the older woman showed no emotions towards the humble gesture. Although later, Serena Williams did admit that Naomi Osaka was the better player and deserved to win. However, this half-hearted statement cannot bring back the moment of stolen glory for Naomi and her family.

Naomi was left in an embarrassment, not knowing what and how to behave in an hour when the stadium should have been hers.

However, Williams faced neither sexism or racism in this grand slam final. Umpire Carlos decisions were clearly made observing clear breaches of the grand slam code of conduct.

In an interview, Serena William’s coach accepted the fact that he was side coching Serena, which was absolutely violating a grand slam code of conduct.

Post witnessing this behaviour social media is in no mood to spare the runner up. Serena Williams has become a fodder for countless memes and a victim of trolling.

Serena Williams (and the US Open crowd) has ruined this title for Osaka and she should be pilloried for it. What a disgrace.

So sad to see Serena Williams reduced to such petulance. To suggest somehow her self-destruction was a sexist act from umpire was a low. Ruined Naomi Osaka's moment too.

Serena williams was losing, saw her arse and pulled the sexism card out! #Pathetic

Astounded that Serena Williams is actually gaining support for her actions. Her behaviour has absolutely nothing to do with sexism and everything to do with her over inflated ego! She broke the rules, she correctly got penalised, nothing more to it. #SerenaWillams

Serena Williams has lost more than an important game. She has lost the world's respect. @serenawilliams

Does anyone think Serena Williams actually has a point? I’m not talking about the ones she had docked. You have to feel for Osaka here. Biggest moment of her life, the birth of a new star and all we’re interested in is Serena throwing her toys out of the pram

@serenawilliams is going to blame the umpire for her defeat…she is always looking for excuses for loosing like it is a crime to loose…. if #naomiosaka was white @serenawilliams would have said she was a victim of racism. what a poor performance from serena

Congratulations, Osaka! To be clear, Osaka didn’t beat Serena because Serena “was docked a game.” Osaka outmatched Serena from the very beginning! #NaomiOsaka

While Serena William’s latest unprofessional conduct will be remembered for ages but is it necessary to let one dark night haunt her forever?

What do you think? Was Serena Williams’s behaviour was acceptable? She could have accepted her loss gracefully, isn’t it? Tell us your thoughts in comments box.