Marking 30th anniversary, “Nike – Just Do It” new marketing campaign ad stirred a huge controversy after Former 49er Colin Kaepernick narrates “Believe in something, even if it means sacrificing everything” with reference to his kneel down in 2016.

Kaepernick had shared a photo on Twitter of himself featured in Nike’s new marketing campaign, which read –“Believe in something, even if it means sacrificing everything”

Believe in something, even if it means sacrificing everything. #JustDoIt pic.twitter.com/SRWkMIDdaO

It didn’t even take minutes for an ad to go viral, where Colin and Nike started receiving backlash and support, both. In 2016 NFL preseason game, Colin Kaepernick decided to kneel rather than stand for the national anthem to silently protest racial injustice and became activism. Since then, he is not signed with any NFL team and he alleged that NFL and it’s owners conspired to prevent him from getting signed to a team. The matter is reached to the court now and hearing is expected somewhere at the end of year. 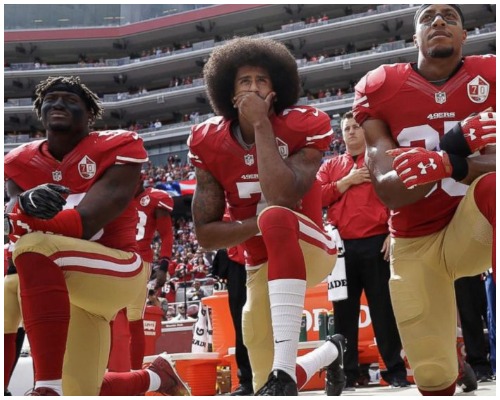 Especially proud to be a part of the Nike family today. #justdoit pic.twitter.com/GAZtkAIwbk

So much respect @Kaepernick7 https://t.co/eGXfjG1gBj

Through it all. Just believe. #JustDoIt pic.twitter.com/6Iy9rHXr2L

whereas Donald Trump hit hard at Nike and Colin Kaepernick with a tweet:

Just like the NFL, whose ratings have gone WAY DOWN, Nike is getting absolutely killed with anger and boycotts. I wonder if they had any idea that it would be this way? As far as the NFL is concerned, I just find it hard to watch, and always will, until they stand for the FLAG!

The controversy dropped Nike’s shares on wall street by 3 percent on Tuesday, however it recovered a bit on Wednesday. While some are burning a pair of Nike shoes on social media as an act of boycotting Nike, some are questioning Nike’s motive for stirring political wave.

one group estimates that Nike have already received more than $43 million worth of media exposure, much of that positive.

“Most people aren’t looking to make political decisions with their sneaker purchases,” Nomura analyst Simeon Siegel said. “But whenever a brand attaches its logo to someone else’s face, they are making a calculated cost benefit analysis that is something that has been core to Nike’s DNA.”

After receiving a mixed bag of voice, Nike releases a new 2 minute video ad which says”Dream Crazy”, ” chase your dreams”, which they will play at NFL Season opener tonight. The video is narrated by former San Francisco 49ers quarterback Colin Kaepernick with no political string attached with it and has no agenda of supporting Kaepernick’s cause of racial injustice.

Believe in something. Even if it means sacrificing everything. #JustDoIt pic.twitter.com/x5TnU7Z51i

Isn’t Nike a real smart in gaining brand image with even controversial sports athlete without directly talking about his controversy. Nike is all planning to use his image to launch new Kaepernick apparel, including shoes and T-shirts.

Do we all see that Colin Kaepernick is rose to fame as social image and Nike has been a strong platform for it. We think Colin may never want to go for NFL and become a face for change and bringing racial justice. What do you think?