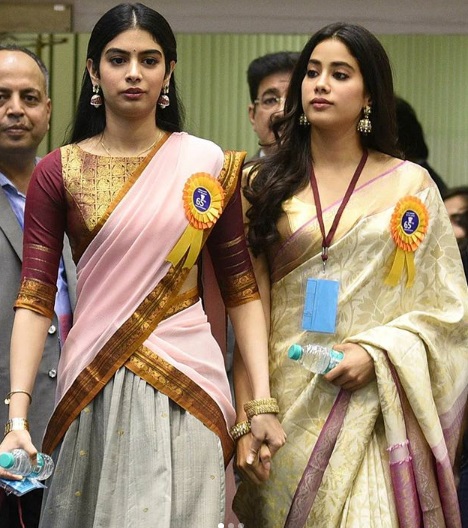 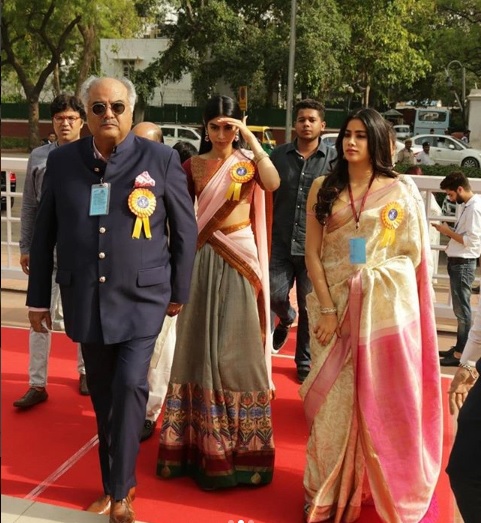 It was an emotional as well a proud moment for the Kapoor family as late actress Sridevi was no more with them to share the happiness and accept her 65th National Film Award by herself. Janhvi Kapoor wore her mom Sridevi’s saree for this special occasion. Designer Manish Malhotra, who was Sridevi’s close friend and favorite designer, posted this picture of Jahnvi kapoor in Kanchivaram saree. Sridevi had wore this same saree during one of the event.

The very pretty @janhvikapoor as she goes to Receive Sridevi Ma’am’s Much Deserved National Award for her fabulous performance in Mom’ … An Actress and a human being and the friend that we all miss every day of our life’s … #jhanvikapoor in her Mom s personel Saree for this emotional and precious moment #manishmalhotraworld .., #kushikapoor #boneykapoor @mmalhotraworld

So was Sridevi’s younger daughter Khushi Kapoor, draped a traditional south Indian style lehenga at the National Film Awards. Emotional Boney Kapoor said, “I wish she was here. She truly deserved this award. It’s so unfortunate that she is not here with us today to celebrate. I am grateful to the government of India, the I&B Ministry and the jury. It is a proud moment for all of us but sadly she is not here.”

Ahead of the ceremony, Janhvi Kapoor told reporters, “I want to thank the jury and the government of India for recognising the hard work my mother has done. It is very special for us as a family.”