Indian Cricket Team captain Virat Kohli and Bollywood actress Anushka Sharma are in a steady relationship since 2013 and going strong. Their sizzling chemistry is loved by the fan follower’s of Virat and Anushka both. This power packed couple is most loved and talked about couple in the Bollywood. We have spotted Virat Kohli and Anushka Sharma together on many occasions; Be it cricket match, celebrating new year at Uttarakhand, holidaying or birthdays. The love birds kept their lips tight and never opened up about their relationship.(Pics Alert: Anushka Sharma Makes Virat Kohli’s Birthday Special In The Most Adorable Way!)

The speculations about their relationship became rife when the duo was spotted together on many occasions. Durinf test cricket match in Melbourne, Dec 2014 Virat Kohli blew a flying kiss to Anushka Sharma and it became the sensational news.

In the mid of 2016 there were also reports on Virat-Anushka split which was debunked by the couple. They both are going strong. As we all know, Virat Kohli is now the captain of Indian Cricket Team and Anushka Sharma launched her own production house with first movie ‘Phillauri’ releasing on 24th March, we see the schedule is hectic for both and expect no where any wedding plans in near future.(Also Read: Have Some Shame: Anushka Sharma Slams Media For False Claims About Virat Kohli Producing ‘Phillauri’)

But, but, Just in is – Virat Kohli openly admitting on his relationship with Anushka Sharma. He took to Instagram to make it official and shared the valentine post message tagging his lady love. He made it public a day after Valentine’s Day. The caption is – “Everyday is a valentine day if you want it to be. You make everyday seem like one for me ❤❤.”

Everyday is a valentine day if you want it to be. You make everyday seem like one for me ❤❤. @anushkasharma

Virat Kohli had also tweeted the message but later deleted the same. Here is the screenshot – 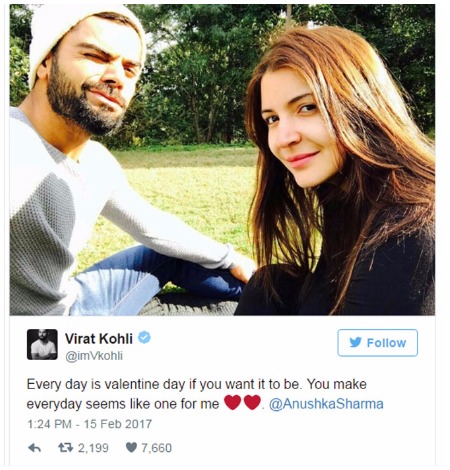 Virat Kohli’s confession about being in relation with Anushka Sharma was unexpected, not at-least a day after Valentine’s. The news is insanely trending and the internet just can’t handle it and so are we. This was the cutest message from Virat to Anushka and let’s see if the Sultan actress acknowledge on this.

0 0 0
Previous : Shah Rukh Khan and Abram: Two Studs Taking A Late Night Walk On The Beach
Next : Kareena Kapoor Khan Has Put On 18 Kgs and She Shares Her Plans On How She Will Lose Weight