United States Of America’s First Lady Melania Trump has sparked some peculiar rumours since her latest appearance.Ever since May 2018, First Lady Melania has been out of the media’s glare. As per her communications director Stephanie Grisham, so far, Melania Trump has been recovering after an embolization surgery for a ‘benign kidney condition’. However, post her latest appearance many people cannot help but think that the First Lady was not recoveringfrom her kidney surgery but from a breast implant surgery!

Yes, you read that right!

According to the latest rumours First Lady Melania Trump has gone under the knife to get breast implants and was recovering from the surgery all the while she was MIA. The rumour mill started running on August 28, 2018, when Melania made her first appearance after months post her ‘surgery’. Melania was spotted wearing a pale pink tank top which was looking rather tight around the chest area.

Don’t believe us? Here, have a look at her previous picture and her latest picture: 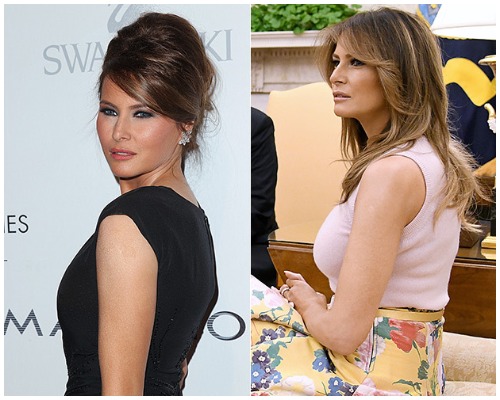 Seems like a considerable change in the chest area for a kidney surgery, right?

As expected Twitter has been raging with memes and opinions. One user brought up Melania’s infamous nude pictures from her modelling days indirectly stating that she has small breasts: “If you’ve ever seen the nude three way on the cover of the New York Post, there’s nothing there.”

If you've ever seen the nude three way on the cover of the New York Post, there's nothing there.

Another user accused Melania for getting more than just breast implants done in guise of getting a kidney surgery: “Notice when @FLOTUS smiles, the deep facial wrinkles have ‘disappeared’? Her hubby, #trumpster, saw them on TV a few times and sent her to have a ‘kidney surgery’ ?”

Notice when @FLOTUS smiles, the deep facial wrinkles have ‘disappeared’? Her hubby, #trumpster, saw them on TV a few times and sent her to have a ‘kidney surgery’ ?

This not the first time Melania Trump has been under radar for her looks. As per an on-going belief, both, American President Donald Trump and his wife Melania Trump use body doubles during non-interactive appearances! The latest instance where the public is absolutely sure that the Fist Lady has used a body double was when the First Couple was leaving Columbus rally.

In both the cases— if she has gotten breast implants and more or if she uses a body double, these rumours can only be cleared by the First Lady Melania Trump.