A good 8 years of marriage comes to an end. Two days ago, Melissa Geeks had given out her statement of planning to file for a divorce from her husband after he was found guilty of making love with a multimillionaire TopShop British heiress Chloe Green. Before Melissa could file for the divorce, model Jeremy took the immediate action for legal separation. 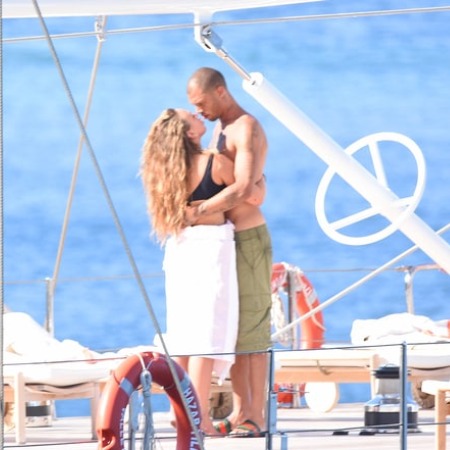 Jeremy told his wife Mellisa that he is travelling to Turkey on a business trip to promote a resort. Believing what her husband said, Melissa’s world went topsy-turvy when she received pics on her mobile where Jeremy was seen kissing intimately with Chloe Green.

Melissa, who is nurse by profession told, “My whole world has been torn apart by this. What do I tell our children? My heart is broken.”

Melissa got to know about Jeremy’s affair only when an unknown person sent the pictures on her Instagram account. She said, “The first I learned of it was when I woke up and checked my phone. Some random person I don’t know sent a direct message with the photograph of my husband kissing that woman. I went into shock. I felt nauseated. It was like a bomb had gone off and my whole world had been blown apart. I’d never heard of Chloe Green. I thought Jeremy was working.”

The blue eye model Jeremy rose to fame through modelling and is married to Melissa for eight years. It was her wife Melissa, who stood by him during his dark days of imprisonment. He was arrested for possession of firearms and criminal street gang activity. Apparently, Jeremy caused the marriage to end by cheating on his wife and having an ex-marital affair with daughter of shamed tycoon Philip Green.

Jeremy and Chloe Green picture of lip locking on a yacht in Bodrum, Turkey went viral. We all then know what kind of business did Jeremy had got to do in Turkey.

“I went into shock. I felt nauseated. It was like a bomb had gone off and my whole world had been blown apart,” Melissa said. “We talked about divorce. I told him I didn’t think the marriage could be saved. He agreed. The marriage is over.”

Melissa also took a dig at Chloe Green saying, “What sort of woman would do something like this to another woman?”

As soon Jeremy made his return to LA on Monday, press and fans gathered at airport and started questioning him about his kiss scandal. But he model refrained from commenting anything.

Jeremy and Melissa have a son together. Besides, Melissa also has a daughter and another son from previous relationships. Its really sad that Jeremy Meeks did cheat his wife and eventually a good marriage comes to an end.

0 0 0
Previous : Daniel Craig Set To Return For Bond 25, After Saying He’d Rather Slit His Wrists Than Do Another 007
Next : Sonam Kapoor To Get Married To Beau Anand Ahuja On Father Anil Kapoor’s Request?