Footballer Cristiano Ronaldo is accused of rape by US based model and teacher Kathryn Mayorga, to which Ronaldo have clearly denied and called it ‘fake news’.

The news of Cristiano Ronaldo’s rape allegation came as a shock to us. One of the world’s biggest footballer name is surfacing on internet for the wrong reasons. Cristiano Ronaldo, 33, is accused of rape by US woman model Kathryn Mayorga, who says he raped her in a Las Vegas hotel in 2009.

Cristiano have firmly denied the allegations and released a statement on Wednesday via his management company and twitter account both in Portugese and English language. The statement reads, “rape is an abominable crime that goes against everything that I am and believe in”.

I firmly deny the accusations being issued against me. Rape is an abominable crime that goes against everything that I am and believe in. Keen as I may be to clear my name, I refuse to feed the media spectacle created by people seeking to promote themselves at my expense.

My clear conscious will thereby allow me to await with tranquillity the results of any and all investigations.

Kathryn’s lawyer Leslie Stovall said, “The MeToo movement and the women who have stood up and disclosed sexual assaults has given Kathryn a lot of courage.”

Leslie Stovall have filed a lawsuit in Las Vegas, alleging Ronaldo of raping the then-24-year-old Kathryn, the former teacher, in his penthouse suite at a Las Vegas hotel.

The lawsuit filed on October 1, 2018 states that Kathryn Mayorga met Ronaldo at the Rain Nightclub in the Palms Hotel and Casino in Las Vegas on 12th June 2009. She claims that 33-year-old Portuguese footballer raped her while she repeatedly screamed no.

Ronaldo in an Instagram live post on Friday called the allegations against him as a publicity stunt and ‘fake news’ – “What they said today, fake — fake news. They want to promote by my name. It’s normal. They want to be famous — to say my name. Yeah but it’s part of the job. I’m (a) happy man and all, all good.”

Mayorga had earlier filed a report with Las Vegas police in 2009 after the alleged incident. However, she was scared to identify the man and location, obviously because he is renowned athlete.

Las Vegas police confirmed on Tuesday they had initially investigated a complaint in June 2009, but added they had no suspect in the case.

“At the time the report was taken, the victim did not provide detectives with the location of the incident or suspect description,” a statement said.

However, the case is reopened now and Ms Mayorga, 34, have come open with the face and name who raped her.

German weekly news magazine Der Spiegel claims that Mayorga was reached for an out-of-court settlement in 2010 for remaining silence and was offered $375,000 (£288,000). Ronaldo’s fixer who also best known as  “personal reputation protection specialists” took a written agreement from Mayorga to never to go public with the allegations.

Her lawsuit seeks to void the settlement and agreement which Ronaldo and his people took advantage of her emotional state and persuaded her into signing a settlement.

The lawyer said that Ms Mayorga, now 34, was “emotionally fragile” and agreed to an out-of-court financial settlement nine years ago because she never wanted her name made public.

Ronaldo has 20 days to respond to Ms Mayorga’s lawsuit. Her legal team have released documents linked to the case, including the initial police report and medical records in a today’s press conference. 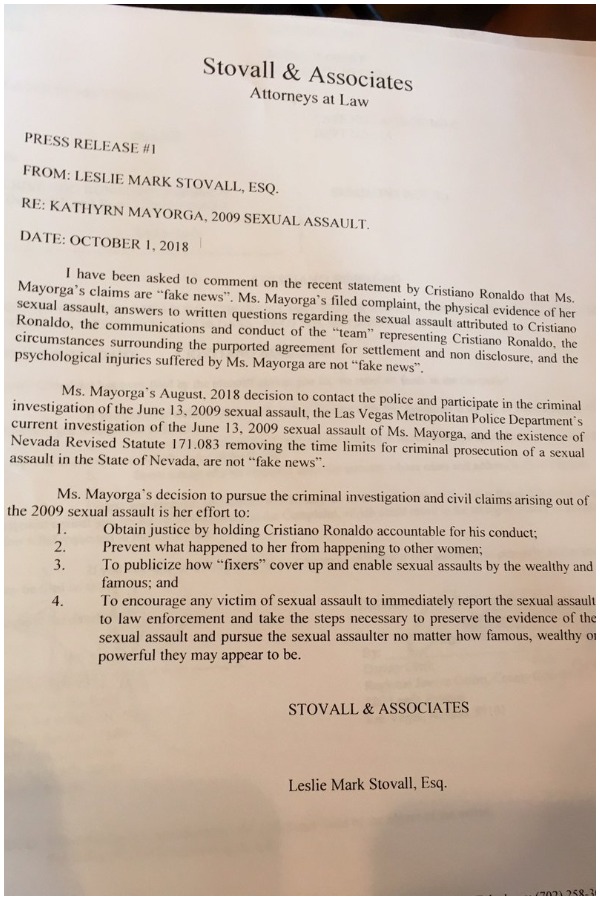 Looks like #Metoo and #WhyIDidntReport movement will open lids of many dirty cans that were falsely worshiped and idolized.

0 0 0
Previous : Justin Bieber Introduces Hailey Baldwin As His Wife, Are They Married? Read To Find The Truth!
Next : Kanye West Gifts His Wife Kim Kardashian $1 Million Cheque And Share In Partnership