Actor Anil Kapoor’s son, Harshvardhan Kapoor’s twitter rant against Filmfare over debut award is known to everyone. He lashed the Filmfare over giving out the best debut award to Punjabi actor Diljit Dosanjh for his Bollywood debut Udta Punjab. Harshvardhan lost his temper and conveyed that how a debut award could be given to someone who is already an established actor in other industry.

Things did not go well and magazine’s executive editor Anewradha slammed Harsh for his rude comments. The war of words kept exchanging between the duo, look below- 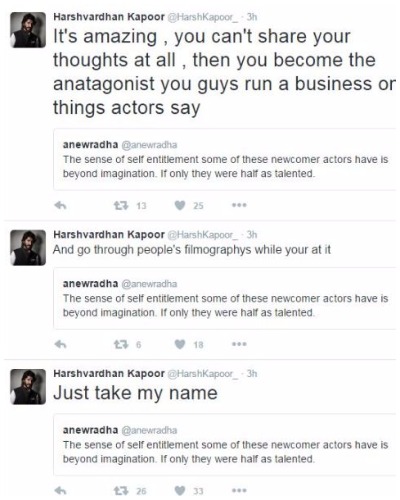 Diljit gave a very humble reply to all this ongoing controversy, “Koi na Koi na. I didn’t feel bad at all. I am a huge fan of Anil Kapoor and Harsh is the son of a big superstar. I know that Dhanush got an award, who has worked in many South films and Fawad Khan also got an award, who is a star in Pakistan. I am not the first example. So it is not ethically wrong. People’s love is the biggest award.”

Looks like Harshvardhan was at shame for his words and anger which was too unreasonable and finally apologized Diljit, tagging his dad Anil Kapoor , “Love you to sir, have lots of respect for you and your body of work sorry if I said anything that came out wrong @diljitdosanjh @AnilKapoor”

Love you to sir, have lots of respect for you and your body of work sorry if I said anything that came out wrong @diljitdosanjh @AnilKapoor

We still wondering why Anil Kapoor was tagged!? Did he apologize because he was asked by Anil Kapoor? What you think guys? Let us know your thoughts in the comment box.