Without any further delay, let us look at the highlights of the last week:

While the world is mourning the loss of not seeing Quantico’s Alex Parrish anymore—Priyanka Chopra along with rumoured fiancé Nick Jonas is in Singapore. The much in love couple was seen arriving in Singapore, twinning in all black attires. Later Priyanka and Nick were seen cosying up at a party among friends.

In the short video we can see a yellow dress clad Priyanka Chopra boisterously laughing at something while Nick Jonas mutters sweet but nothing into her ear. Certainly, Priyanka Chopra and Nick Jonas are the very definition of adorable!

Wedding rumours not only surround Bollywood diva Priyanka Chopra but also her ‘Bajirao Mastani’ co-star Deepika Padukone! Amidst the year-end Italian wedding rumours, Deepika Padukone and Ranveer Singh took a mini vacation in Florida. While the couple was trying to be discreet— a fan caught them on video. Deepika and Ranveer were walking hand in hand when Deepika saw a fan trying to film them.

In the video we can see Deepika walking towards the camera person with a tight-lipped smile while Ranveer looked exasperated. Later in a series of post the fan, Zainab Khan explained how she politely asked the couple for a picture while Deepika and Ranveer yelled at her for invading their privacy. Shaken, Zainab said that she has lost all respect for ‘these’ actors as they are nothing but fake.

Whose side are you on in this fiasco? Ranveer & Deepika were on a private vacation when a fan out of excitement recorded them but according to her Deepika & Ranveer yelled at her. Should we record people without their consent, or stars should be more respectful towards their fans?

Did you know that Abhishek Bachchan proposed to Aishwarya Rai Bachchan with a fake ring?

Everyone knows that love blossomed between Abhishek Bachchan and Aishwarya Rai Bachchan on the sets of ‘Dhoom 2’. But do you know how Abhishek proposed to Aishwarya?

While the couple fell in love on the sets of action packed ‘Dhoom 2’, Abhishek went down on one knee while filming Mani Ratnam’s 2007 hit ‘Guru’ opposite his lady love Aishwarya Rai.

On a freezing night in the New York city, Abhishek proposed to his now-wife Aishwarya while kneeling in their hotel’s balcony. Obviously Aishwarya was taken aback with happiness and she said yes. However not many know that it was not an expensive ring that won Aishwarya’s heart but a fake prop ring from the sets of ‘Guru’ that helped Abhishek complete his simple yet grand proposal. After returning from the States the couple decided to officially get engaged in January 2007. Few months later the couple got married in April 2007.

Debate of nepotism in Bollywood sparked by debuts of star children Ishaan Khatter and Janhvi Kapoor hadn’t even died down that one more example has joined the bandwagon. After months of wait Vogue magazine’s cover featuring Suhana Khan was finally unveiled.

While Suhana looked stunning on the Vogue magazine cover, the young starlet faced a lot of heat for the same. While some trolled the young star child for her complexion and so-called struggles, some trolls were confused as to why Suhana was on the cover of the magazine in the first place. Naturally, Suhana has become a meme and a laughing stock.

Has Suhana done anything apart from being Shah Rukh Khan’s daughter to feature on the magazine’s cover? Do the trolls have nothing to do but torment a young girl on the basis of her complexion and the family she belongs to? 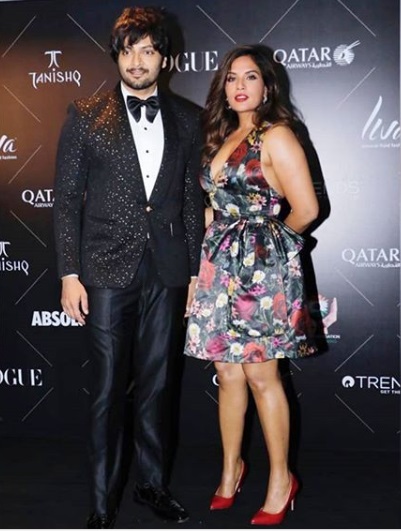 During the recent Vogue Beauty Awards 2018 Ali Fazal and Richa Chadha were titled as the ‘Most Beautiful Couple’ of Bollywood. Ali and Richa have been making headlines due to their relationship ever since they made their courtship public last year. The couple thanked the magazine for thinking of them and expressed that this award is a good way of celebrating love amongst all the hate. In 2017 Shahid Kapoor and his wife Mira Rajput Kapoor were felicitated with this title.

One Word for this Jodi ❤️

Salman and Katrina looked absolutely dreamy in their regal attires. Katrina looked like a vision in her brown heavily embellished lehenga teamed up with a billowing cape. While Salman Khan looked dapper in a black embroidered sherwani. This show was even more special since Salman Khan walked the ramp for Manish Malhotra for the first time.

Probably the day when Priyanka Chopra is not in news will not exist! Priyanka Chopra created quite a stir when director Ali Abbas Zafar announced that she will not be a part of the multi starrer cast movie ‘Bharat’. While fans felt cheated many got busy trying to figure out why Priyanka walked out of the project last minute.

Another insider stated that Priyanka Chopra was unhappy with the remuneration offered to her for starring in ‘Bharat’.

While there are many possible reasons as to why Priyanka left the Salman Khan starrer, we say Nick Jonas popped the question at the correct time, right?

So folks, here was your weekly Bolly Scoop. See you next week!

0 0 0
Previous : Meet Gul Panag’s 6-Month-Old Son; Here Is Why And How She Kept Him A Secret!
Next : See Pics: ‘Roadies’ Raghu Ram Gets Engaged To Canadian Singer Natalie Di Luccio!