Bollywood actress Amy Jackson was the opening performer of 10th edition Indian Premiere League 2017 which was held on April 5. She was the centre of attention at IPL 2017 for her opening performance at Rajiv Gandhi International Stadium in Hyderabad, held on April 5. Her performance started with the Bollywood songs Kaala Chashma, Om Shaanti Om and it was so pathetic that it did not please anyone. Instead of getting praised, Amy Jackson got trolled on social media. Her dance was described with phrases like “so pathetic” and “damn hilarious”. 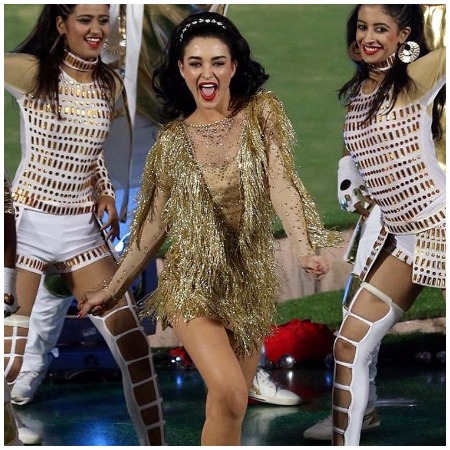 Also Read: An Insensitive Hoax About Vinod Khanna’s Death on WhatsApp Is Going Viral and It’s The Most Wicked Thing

Amy Jackson soon became the trending topic on Twitter as people started sharing their views on her crappy dance performance at IPL 2017. Not only her bad performance, even her wrong lip-sync irked the viewers of IPL. Amy’s performance turned out to be nightmare and became talk of the town. Most hilarious tweet was Amy Jackson’s comparison with Sunny Deol’s dance and twitterati asked for replacement.

When Sunny Deol was asked for Amy Jackson’s replacement

When the Deol family was one of twitteari’s demand

Ohh bad! Compared with a puppy

#IPLOpeningCeremony
My dog dances better than Amy Jackson,
It's the worst of them all#AmyJackson can't dance saala

A Fumbling Dance By Amy Jackson !

This Seasons #IPLOpeningCeremony was FLAT !
10th Season is enmarked only with the presence of Legends and A Fumbling Dance By Amy Jackson !

Amy Jackson is moving exactly like I would in a Zumba class.
When the instructor isn’t looking.#IPLOpeningCeremony

When we thought it was wrestler dance

You have got more fun to add for Amy Jackson? Write us in the comments box or tag us on twitter @Eventznu

0 0 0
Previous : An Insensitive Hoax About Vinod Khanna’s Death on WhatsApp Is Going Viral and It’s The Most Wicked Thing
Next : Aamir Khan Stops Release Of Dangal In Pakistan After Being Asked To Cut National Anthem From Film