Bollywood actress Sonam Kapoor celebrated her proud moment yesterday as she received National Awards for her film, Neerja. The actress was on cloud 9 as she received a special mention at the 64th National Awards. One person who couldn’t hold excitement was none other than Sonam’s father Anil Kapoor. Like every proud dad, Anil Kapoor was seen clicking pictures of his daughter receiving the huge honour. He even shared on twitter that how he turned a photographer for his daughter.

“Clearly cannot contain my excitement! Father turns photographer,” he says in his tweet.

It just did not end there! Anil Kapoor posted some more adorable photos of Sonam Kapoor from the National Awards ceremony.

Post #NationalFilmAwards celebrations! Ram is all smiles with his first ever actor @bomanirani & his latest actress @sonamakapoor ! #Epic pic.twitter.com/10NpgH4kQu

Smiling ear to ear! Congratulations #TeamNeerja for giving your best and then some more! Well deserved! pic.twitter.com/90SbBjkX99

Congratulations @akshaykumar !! So happy for you!! Hard work , talent & discipline has resulted in this win! Well done! #NationalFilmAwards pic.twitter.com/45aHvRllJr 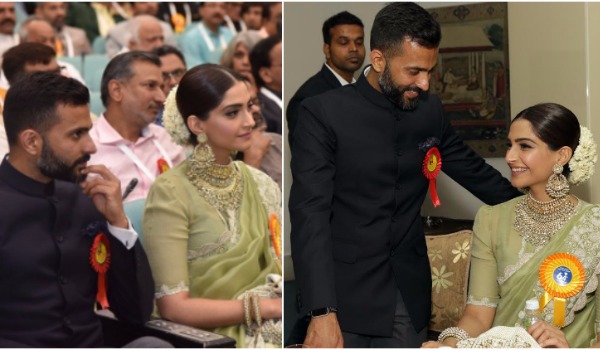 On the other hand, Bollywood actor Akshay Kumar received National awards for his film, Rustom from President Pranab Mukherjee. The Khiladi actor was quite excited and on cloud 9 as the honour came to him after a wait of long 26 years. Nothing could make him feel proud after receiving the award in front of his wife Twinkle and son Aarav.

Before heading to the awards ceremony in Delhi, Akshay also shared a group picture of him with wife and son. However, his little daughter Nitara was missing from the frame. The actor captioned the image as, “An important day in my life with the most important people in the world to me, my family #NationalFilmAwards.”

An important day in my life with the most important people in the world to me, my family #NationalFilmAwards

No words can do justice to the joy I feel at this moment…sharing with you all my first ever #NationalFilmAward!Thank you for the love ??