as awarded the Crystal Award at the World Economic Forum 2018 in Davos, Switzerland.

Bollywood superstar Shah Rukh Khan added another feature to the hat by receiving precious award at the World Economic Forum in Davos for the work raising awareness about human rights issues. SRK, along with actor Cate Blanchett and singer-songwriter Elton John was honoured for showing contribution through his non-profitable Meer Foundation.

What left everyone amazed at the event was Shah Rukh Khan’s inspirational speech that is currently a talk of the town. His speech reveal about the moment that changed his life.

I am genuinely and deeply grateful for this honour and it is a privilege to be in the company of two phenomenal and extraordinary human beings and talent, Cate Blanchett and Sir Elton John. 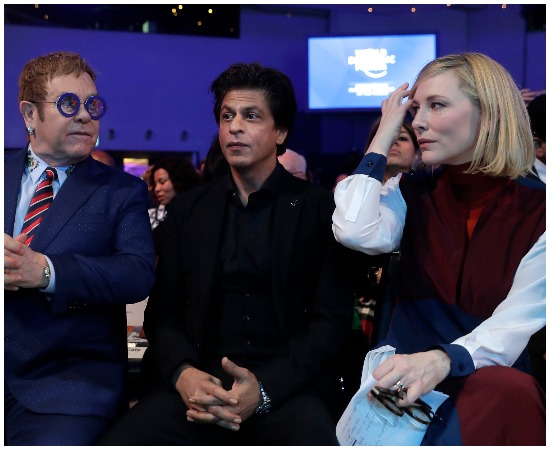 She is of course a lady who commands the wind and you sir command the song of a billion hearts, including mine. I am really touched that I am chosen between these two. Just a special request, before you go, can I do a selfie? Now, there I have embarrassed my children.

Actors are renowned narcissists. No matter how much we pretend not to believe in external beauty, we tend to be obsessed by it one way or the other. And perhaps being surrounded by this obsession of beauty, a few years ago I came across a lady who had been brutalised by an acid attack. It kind of changed my life or my perspective of it, at least.

To disfigure a woman by throwing acid on her face, to me, is one of the basest, crudest acts of subjugation imaginable. At the source of it lies the view that a woman does not have the right to assert her choice, say no to the advances of a man or a group of people. And yet, each of the women I met, I found within them the courage to move on with their lives and reject the idea of victimhood. What struck me most about them was this — what was done to them only made them braver, stronger and able to free themselves, to make the choices everyone around them was telling them they could not make or should not make. From them I have learnt how courage can catalyse victimhood into heroism, how solidarity — rather than charity – enables the human will to overcome, how equality is not a concept but a truth that encompasses all living beings, how service of others is not a choice anymore for any of us but it is a duty that all of us must fulfill in the name of humankind.

When I journeyed through the life of these heroic women and children through the work of Meer Foundation, I experienced a complete reversal of perspective. I stumbled upon the truth that there are no benefactors and beneficiaries between living beings anymore. There is just a vast pool of resources – natural, spiritual, economic and technological – that everyone is equally entitled but some have gained by more access to it. Either by accident, as in my case, or by talent, design and hard work as in the case of all of you present here. Standing here before all of you who constitute perhaps the most powerful group of human beings in the world, I dare say power is one of these perspectives we like to maintain a certain way but power actually needs a complete reversal more than any other thing in the world today.

I was babysitting my five-year-old son before I came here today and suddenly he screamed, “Papa, papa my eye went into my hair. Can you get my eye out of my hair?” He didn’t say get my hair out of my eye, like we all believe we do. And it is a bit like that when you have power, you think things get in its way but it is actually power that is getting in the way.

It gets in the way of universal access to resources because it seeks to control and enclose them so we, the powerful, need to get out of the way, I think. To pick the barriers apart – the ones that give us names and colours and races and hierarchies. We need to get out of the way and into the work of breaking open access for each and every one with a true sense of ourselves but not as more powerful or less privileged, but genuinely as equals. That is what I have learned from my beautifully scarred women. I am thankful to these brave women and children who I work with for all they have done for me, to World Economic Forum and all of you present here for recognising the heroism by conferring this award upon me.

I want to thank my sister, my wife and my little daughter for bringing me up well and teaching me the value of requesting, sometimes imploring and begging a yes from a woman, instead of forcing it upon her.

0 0 0
Previous : Karan Johar Lands In Legal Trouble, Can Be Jailed For Five Years!
Next : ‘I Felt Reduced to a Vagina’: Swara Bhaskar Slams Sanjay Leela Bhansali In Open Letter Against Padmaavat, Twitterati React!