In short eight years Ranveer Singh has cemented his presence in the Hindi film industry. Birthday boy Ranveer forayed into the glamorous world of Bollywood through the young and fresh ‘Band Baaja Baaraat’. It took just one film to show established actors of Bollywood that a new star has arrived. Criticized of being unpolished—Ranveer was a raw diamond. The diamond which has only grown to shine brighter with every film he has been a part of.

So, on the occasion of Ranveer Singh’s 33rd birthday, here are some interesting bits about him:

1. Ranveer Singh’s connection with the Kapoors

Birthday Special: 5 Times When Ranveer Singh Wore Most Wackiest Outfits Like No Other!

Entering Bollywood is a tough feat and making debut through a Yash Raj produced film is even more difficult. So, as per rumours, Ranveer Singh’s wealthy businessman father— Jagjit Singh Bhavnani bribed ‘Band Baaja Baaraat’ producer Aditya Chopra with Rs 20 crore to launch his son. However, much later Aditya denied any such claims but there is no smoke without any fire, is there?

Not many people know that Ranveer Singh and Aditya Roy Kapoor were classmates during their college days. Ranveer’s girlfriend of those days dumped him to date a certain curly headed boy— Aditya Roy Kapoor. Want to know who dumped the box-office’s reigning King? It is believed that Hema Malini and Dharmendra’s daughter Ahana Deol left Ranveer in the dust to date a very athletic Aditya Roy Kapoor. However, Ahana is now maaried to a Delhi-based businessman Vaibhav Vohra.

Ranveer Singh Reveals His Wedding Plans And Its Something That Every Girl Would Want!

Ranveer Singh has proved that his talents are not limited to acting on screen and delivering fantastic punch lines. One of the hidden talents that Ranveer enjoys possessing is being a rapper. In the past Ranveer has lent his rapping talents to a song featured in his film ‘Ladies v/s Ricky Bahl’. Apart from promoting brands Chings and Durex, Ranveer has also sung songs for them.

5. When Ranveer Singh popped his cherry

While promoting condom brand Durex, Ranveer shocked everyone beyond belief with his confessions. Very non nonchalantly Ranveer revealed that he lost his virginity when he was a mere 12 years old! Ranveer further added if need be he can write a thesis on the topic as he used to preach his fellow school boys about the messy intricacies of sex. Clearly, Ranveer has always been in rush to do things his way.

6. Ranveer Singh and his quirly sense of style 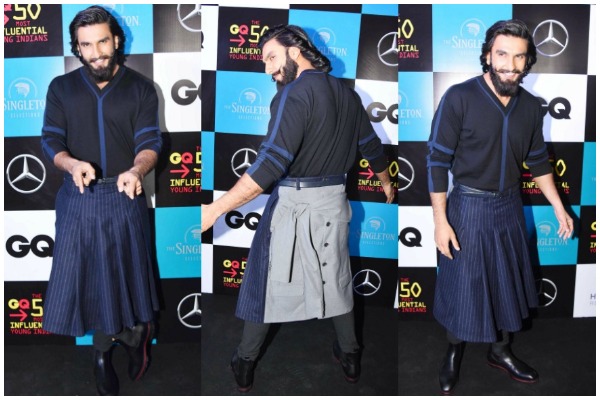 Many Bollywood actors even in their wildest dreams will not wear the flamboyant outfits that Ranveer Singh dons regularly. Ranveer Singh has been known to blur lines between male and female fashion. Famous for wearing over the top printed attires the ‘Padmaavat’ actor left many jaws hanging when he decided to turn up to a GQ Magazine event dressed in a long skirt and a full-sleeved t-shirt combo. Once Ranveer even wore a women’s bomber jacket. Why? His stylist has a very simple answer: If you like it, wear it.

7. When Ranveer Singh was trolled for calling himself as ‘poor’

Now it is a known fact that Ranveer Singh’s father is Jagjit Bhavnani is a wealthy businessman. He studied abroad and spent his holidays while growing up in different countries. So, naturally, the question of Ranveer being poor is out of question, right? Well, not if you ask Ranveer! According to the ‘Bajirao Mastani’ actor his family was so poor that they could only afford family vacations to locations like Indonesia, Singapore, Italy and the Unites States Of America. Whereas most of the children would have been happy with going to stay with their nani during summers, Ranveer was dejected because he was going to the States.  It is obvious that Ranveer got trolled. In fact, the confession from Ranveer lead twitter trending with the hashtag ‘YoRanveerSoPoor’.

It is no secret that Ranveer is head over heels in love with Deepika Padukone.

In the last few months, on several occasions Mastani Deepika has been spotted with her mother shopping for jewellery and other wedding related items. According to rumours the couple will get hitched sometime this coming November. Maybe that is why both Ranveer and Deepika are becoming extra affectionate on social media as off late?