Banning Pakistani artistes from working in India has become a huge and heated debate everywhere. In the wake of Uri terror attack, political party MNS demanded a ban on Pakistani actors and also asked them to leave the country in the given time. Following the protest, the Indian Motion Picture Producers’ Association(IMPPA) banned Pakistani actors and technicians from working in Bollywood. Bollywood’s biggest banner films, ‘Raees’, which stars Pakistani actress Mahira Khan and Karan Johar’s ‘Ae Dil Hai Mushkil‘, which stars Fawad Khan, have also landed in trouble.

It seems troubles for KJo’s Ae Dil Hai Mushkil is growing with each passing day, ahead of it’s release. Now, the Cinema Owners and Exhibitors Association of India (COEAI) has decided not to screen any movies which stars Pakistani actors. The action is been taken considering people’s sentiments and growing detastation. As per the decision of Cinema Owners, Ae Dil Hai Mushkil, which stars Aishwarya Rai Bachchan, Ranbir Kapoor, Anushka Sharma and Fawad Khan will not be screened in 4 regions-Maharashtra, Gujarat, Karnataka and Goa.

This Video of Akshay Kumar On Uri Attack Martyr Families ‘I,We Are All Alive Because They Are Guarding Us’ Will Awaken You

While addressing the press conference, Nitin Datar, President of the COEAI, said, “Keeping in mind the patriotic feeling and the national interest in mind, we request all our member exhibitors to refrain from screening movies which have involvement of any Pakistani artists, technicians, directors, music directors, etc. Till the relation between India and Pakistan becomes normal, no films with Pakistani actors can be released.”

When further asked if SRK’s Raees starring Mahira Khan will be released, he said, “We will see in the future. If the situation normalises, we will screen Raees. It’s not a decision we can take now.” 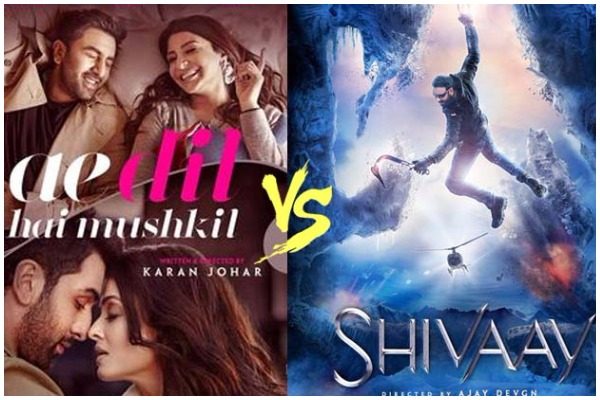 Ae Dil Hai Mushkil is releasing on October 28 in a clash with Ajay Devgan’s Shivaay! We predict that Shivaay might grab this advantage and can be a blockbuster striking ADHM. What you say? Tell us in the comments box.

0 0 0
Previous : The Trailer of ‘Lipstick Under My Burkha’ is Shameless and We Love It
Next : AIFW SS17: Nimrat Kaur Looks A True Vision In White As She Walks The Ramp For Mandira Wirk