Bogged down by the pressures of his lowly life, Murad wants to leave it all behind. He starts to channel his anger in the form of poetry. With his dedicated girlfriend by his side, Murad tries to reach newer heights but there are hurdles on every path. Does he finally get to go the extra mile?

Rap – Rhythm And Poetry – is a genre of music, Indians are not very familiar with; at least not our older generation. And Zoya Akhtar, who gave us slice-of-life films like ‘Zindagi Na Milegi Dobara’ and ‘Dil Dhadakne Do’ previously, brings us just what we need the most in the music scenario today. With ‘Gully Boy’, starring Ranveer Singh and Alia Bhatt in the lead, Zoya proves that rap is a genre of music our youngsters definitely identify with.

Loosely inspired by the lives of pioneers of Indian street rap – Naezy and Divine – ‘Gully Boy’ is the story of an underdog, who dreams only big. Murad Ahmed Sheikh (Ranveer Singh) is a slum-dwelling, ambitious youth, who wants to break free from his miserable life. His abusive father (Vijay Raaz) has taken a second wife and his ever-suffering ammi (Amruta Subhash) does not have much to say in it; only get beaten up and sob. Growing up in Dharavi is tough and to make ends meet, his cabbie father brings home whatever he earns, hoping that his son would one day start earning. But Murad has other plans. He writes poetry on his destitution, aptly describing his miseries.

Although he has a fiercely-possessive girlfriend Safeena Firdausi (Alia Bhatt) by his side, to cheer him up whenever he is low, there is no way he can run away from his dejection. ‘Danger Aapa’ is his only trusted aide in trying times. A boiling rage inside him comes out in the form of his poetry and it is this talent of his that brings Murad in contact with an already established rap-artist MC Sher (Siddhant Chaturvedi). MC Sher mentors Murad in his early days and brings him in contact with Sky (Kalki Koechlin), an alumnus of Berkley College of Music, who is not just interested in his music but him in particular too. Sky helps Murad record his first video and it is only then that the film starts picking up some pace.

Click here to read all the latest Bollywood movie reviews

The film lends a voice to today’s Indian youth that has been searching for a medium to vent their opinions. Rap is a form of art and that is exactly what it does through the movie. It voices the youth’s mind. Ranveer Singh has never been so good. Give him any kind of role and he makes sure he owns it. Be it the street smart Dilliwala Bittoo Sharma or the flirtatious Ricky Behl or even the murderous Alauddin Khilji, Ranveer Singh has always done justice to the characters he has played on the big screen. His Sangram in the lastest potboiler ‘Simmba’ and the underdog in Gully Boy proved that he is a man for all seasons. 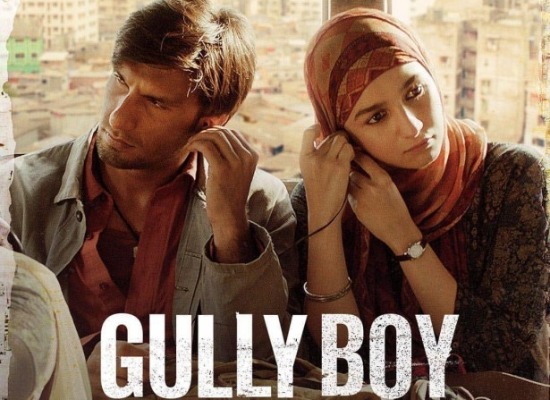 Alia Bhatt plays a feisty daughter of a doctor, a practicing Muslim and the young actor’s de-glam look shows that she doesn’t need glamorous looks to bring her character alive. She, too, can be cast in any role she is given. Vijay Raaz is good and so is Kalki Koechlin in her cameo. But the most promising part is played by Siddhant Chaturvedi, who plays MC Sher in all earnestness. He is a revelation and fits his role to a T. Also, when real-life rappers Naezy and Divine appear on the screen, the auditorium reverberates with youngsters’ whistles and catcalls, only going on to show that our youth have finally chosen their music genre.

The movie is slow-paced and there are far too many angles that have been tried to accommodate into a single, two-and-a-half-hour movie, but ‘Gully Boy’ rises above all the odds. It entertains and only sticks to that. It is a complete musical entertainer, with good doses of humour, emotion, music, poetry, thrill and above all, content. There are a few flaws in the entire running time of the film, but that does not hamper its flow.

All in all, the first of its kind ‘Gully Boy’ is a technically sound movie with power-packed performances, which has the potential to become a great success. Gully Boy is “bhot hard”!