Emma Watson received ‘Neutral-Gender’ award from ‘Non-binary’ (somebody who ‘identifies’ as neither male nor female) actor/actress Asia Kate Dillon, from the show Billions. The award was red in color which looked like over-flowing bucket of pop-corn. 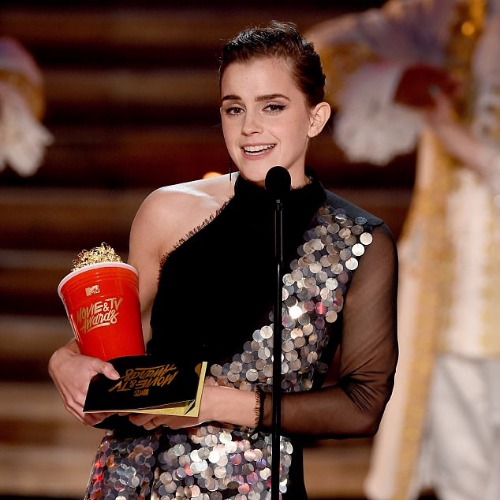 Emma said, “The first acting award in history that doesn’t separate nominees based on their sex says something about how we perceive the human experience”.

She added, “MTV’s move to create a genderless award for acting will mean something different to everyone,” added Watson. “But to me, it indicates that acting is about the ability to put yourself in someone else’s shoes. And that doesn’t need to be separated into two different categories.”

Emma is receiving criticism from her fans and media for her outspoken issues on gender equality and feminism. Even if she hear the word actress, she quickly comment on it saying,sorry, gender-equal actor.

Emma Watson is been drawing criticisms from public and her fan followers for her close knit association with feminism. The actress also went to the extent of showing her breasts loosely covered for Vanity Fair magazine and received large lashes from the public.

The madness is going beyond and it won’t end with Emma Watson, that’s for sure.

0 0 0
Previous : S S Rajamouli’s Baahubali 2: The Conclusion Creates History At The Box Office With Rs 1000 Crore Business!
Next : Justin Bieber To Open The Sixth Season Of ‘Koffee With Karan’?