In ‘Dear Zindagi’ Take 1,Shah Rukh Khan and Alia Bhatt taught us that ‘Life Is A Beautiful Game’. Now, second teaser i.e #DearZindagiTake2 is out and it looks refreshing. Before releasing the second teaser of Shah Rukh Khan and Alia Bhatt starrer Dear Zindagi, the makers of the film teased us with adorable and brand new posters that created a much of hype. The teaser comes with a cute message that will relate to each one of us. The trailer comes with a beautiful life message that reads, “Be it people or jokes, they can all be repaired or recycled.” 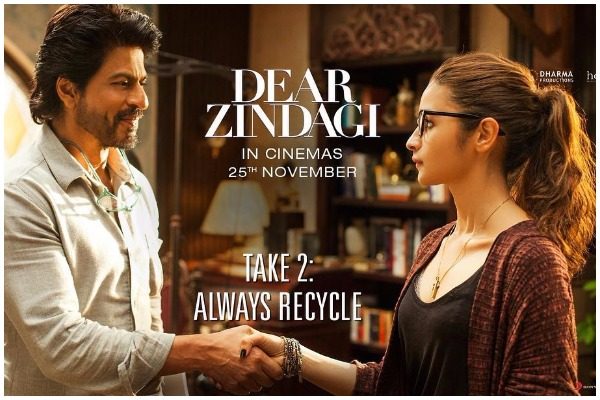 Shah Rukh Khan, as Jehangir Khan is looking hot AF while Alia Bhatt as Kaira is looking adorable in her nerdy look. The teaser showcases how SRK met Alia for the first time and since then he has been mentor for her in every step of her life. It tells us how Kaira, a budding cinematographer encounters with Jehangir, an unconventional thinker.

One definitely can’t stop smiling after watching the second teaser. It’s all about enjoying the small joys of life as Alia does in the teaser.

Hey, Alia, despite your terrible jokes, you look awesome and we are totally in love with you! Surely, a little less than SRK.