Bollywood actress Taapsee Pannu and Bhumi Pednekar are all set to share screen space for the first time in Anurag Kashyap’s film titled ‘Saand Ki Aankh’. The film is a biopic based on world’s oldest sharpshooters Chandro Tomar nick named Shooter Dadi and her sister-in-law Prakashi Tomar aka Revolver Dadi . The first schedule of the film is set to begin on 10 February. 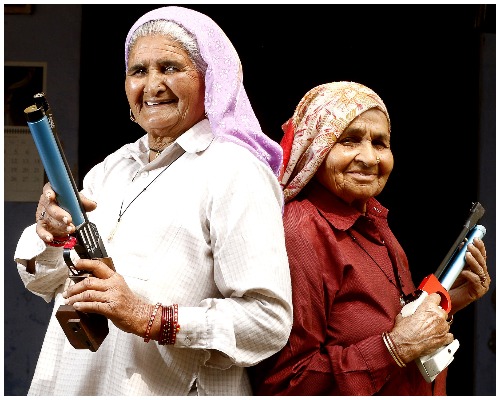 Scriptwriter Tushar Hiranandani made her directional debut with the film.It will also be jointly-produced by Anurag Kashyap and Nidhi Parmar.

Taapsee Pannu shared a picture of herself along with Chandro Tomar, Prakashi Tomar and her-co-star Bhumi. The real life shooters and the actresses are seen holding medals in their hands. The actress captioned the picture as: “यो रेहा टाईटल! क्यूँकि माने ना दिखती चिड़िया कि आँख, माने तो साँड की आँख दिखे है !.” “Proud to be a part of this journey which will bring to you the story of these women who fought all odds to change destiny.”

Bhumi Pednekar also shared a post on her Instagram profile and she wrote: “Old is gold and this is certainly gold! Excited to begin the shooting of this groundbreaking real story of world’s oldest sharpshooters.”

Old is Gold and this is certainly GOLD! Excited to begin the shooting of this groundbreaking real story of world's oldest sharpshooters! @taapsee @tusharhiranandani @anuragkashyap10 @reliance.entertainment @nidhiparmarhira

Earlier it was report that film producer Anurag Kashyap and Pritish Nandy were arguing over the rights of the title ‘Womaniya’. However, after much ado the makers of the film finally finalized the title ‘Saand Ki Aankh’.

Along with Taapsee and Bhumi, Gangs Of Wasseypur actor Vineet Singh and Ek Villain actor Shaad Randhava will also be play a pivotal role in the movie. Vineet also shared a post on Twitter about the same.

Chandro, 87, and Prakashi, 82, are from Uttar Pradesh’s Johri village. Chandra has eight children and 15 grandchildren. She took one of her granddaughter Shefali to Dr. Rajpal’s shooting Academy. When her granddaughter struggled to target with gun for three days, Chandro took the gun from her hands and start shooting at a target where her first shot resulted in bull’s eye hit.

The club coach, Farooq Pathan, impressed with Chandro’s shooting skills and suggested her to join the club.  After starting her practice of shooting at the age of 65, Chandro did not look back. She took part in 25 National Shooting Championships and won all the tournaments. She won a gold medal at the Veteran Shooting Championship conducted in Chennai.

Apart from Chando, her 82 year old sister-in-law Prakashi Tomar is also a shooter. She won many medals and trophies in various state and national level championships. Shooter Dadi and Revolver Dadi’s success encouraged many people to take up shooting as a sporting profession, including their daughters and granddaughters.