Bollywood actor and Bharatiya Janata Party(BJP) MP Paresh Rawal has created a twitter storm after he took a jibe at noted writer Arundhati Roy. Many supported Paresh Rawal over his comment on the writer while many lashed out like never before.(Also Read: 9 Most Shocking Bollywood Controversies Of 2016!)

Rawal had taken to Twitter to post an out-of-context tweet against Arundhati Roy. The Hera Pheri actor conveyed the idea of ‘tying’ Roy to an Army jeep, drawing reference from a similar incident when a Kashmiri resident was tied to a jeep last month. “Instead of tying stone pelter on the army jeep tie Arundhati Roy!” the LokSabha member tweeted on late Sunday night.

This tweet did not go well among the fans and people out rightly condemned the actor’s education. Bollywood filmmaker Vivek Agnihotri, actor Swara Bhaskar and several others also took to twitter to slam Rawal for making such insensitive comment.

Vivek Agnihotri took to twitter and wrote, “Was she making a film or writing manifesto for the politburo? Think it’s @SirPareshRawal who shd be embarrassed for being part of propaganda.”

Was she making a film or writing manifesto for the politburo? Think it's @SirPareshRawal who shd be embarrassed for being part of propaganda https://t.co/YFHaW1JGuw

While general crowd raised their voice against Paresh Rawal’s controversial comment, Swara Bhaskar’s twitter reply caught fire. The actress slammed Rawal in her series of tweets saying, “It’s one thing to disagree with someone, even hate them… but Wow!!!!!!! #Paresh Rawal takes shamelessness and irresponsibility to other level.. As a Parliamentarian he openly threatened a woman and called for a brutal act of violence against her on Twitter. Disgusting! Go join the #GauRakshaksParesh sir, your ilk are out in murderous mobs- go satiate your masculine rage parading as faux- nationalism!!! What a fall from grace for a fine fine actor!!!!”

However, Swara’s reaction on the whole issue turned out to be something unexpected for the actress. She was accused of playing the woman card. Check out how Twitterati reacted: 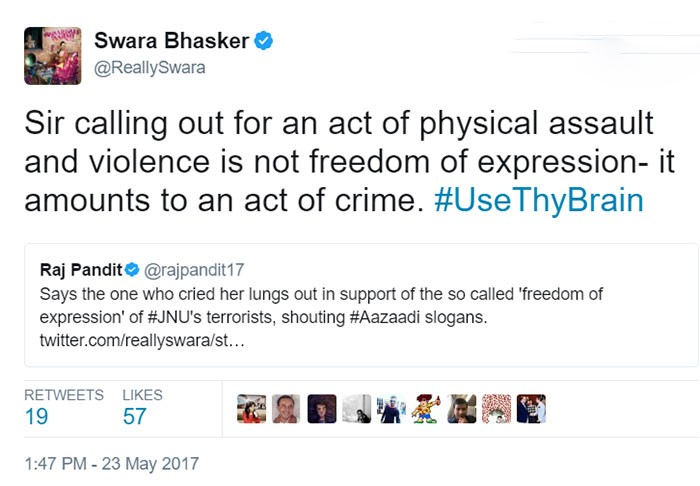 0 0 0
Previous : WATCH: The Fairy-tale Video of Aishwarya Rai With Daughter Aaradhya From Cannes 2017
Next : James Bond Actor Sir Roger Moore Passes Away, Here Are The Top 10 MUST Watch Movies Of His Lifetime