Bollywood actress Karisma Kapoor’s ex-husband Sunjay Kapur recently married for the third time with his longtime girlfriend, Priya Sachdev. The duo tied the knot last week, April 13 in a hush-hush affair attended by only family members. However, after the intimate ceremony in India, Sunjay threw a lavish wedding party in one of the renowned hotels in New York.(Karisma Kapoor’s Ex-Husband Sunjay Kapur Married To His Longtime Beau Priya Sachdev)

The wedding reception was undoubtedly a royal one with Japanese cherry blossom theme, and it seems, after marrying for the third time, SunjayKapur has finally found a peaceful space at a personal front. On the other hand, Sunjay’s current wife Priya was earlier married to American Indian richest hotelier Vikram Chatwal.

One can see in the photos, Priya who is a Delhi-based fashionista, looked absolutely stunning in the gown while Sunjay opted for bandhgala for the wedding reception. However, SunjayKapur’s shoe grabbed all the attention. So what was special about it? One can notice in the photos; the shoes have hand embroidered with the words ‘I Do.’

Check out some of the pictures below of Sunjay Kapur’s grand wedding reception with Priya Sachdev: 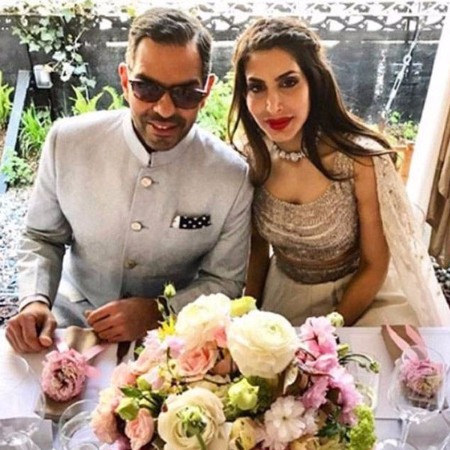 Meanwhile, Karisma Kapoor has moved on in her life and is spending a peaceful life with her two kids, Samaira and Kiaan. Also, Karisma is allegedly dating Mumbai-based businessman Sandeep Toshniwal, and the buzz is, the duo is planning to make their relationship official. However, Sandeep is yet to divorce his first wife and is waiting for the court procedure to complete.