The latest autopsy reports of Sridevi confirms that she fell unconsciousness and drown accidentally into the bathtub in her hotel room in Dubai.

Fans and industry friends are stunned with the latest twisted reports. According to Gulf News, Dubai Police’s investigation has shown that Sridevi drowned in the bathtub of her hotel room. Earlier it was stated that her sudden demise was caused due to major heart attack.

The autopsy report is made public on twitter, stamped  by “Ministry of Health UAE” and the signature of director of preventive medicine, Dubai, Dr Sami Wadie. 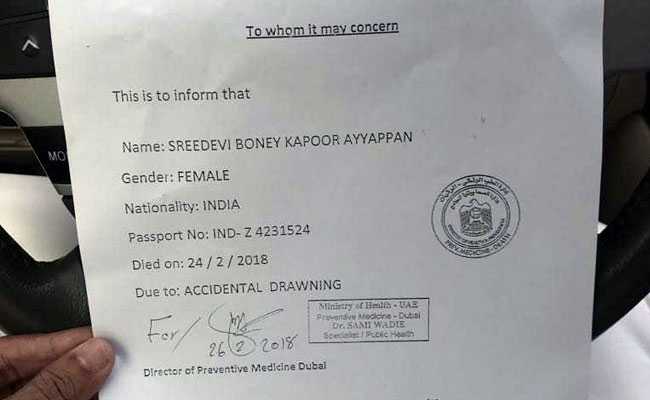 The reports also stated that traces of alcohol was found due to which Sridevi may have lost her balance and fell into the bathtub and drowned.

The Dubai police has transferred the the case to the “Dubai Public Prosecution” who will carry out the legal procedures. According to the rules followed in Dubai, if a person dies in the hospital and if the cause of death is known then the process to release the body is supposedly quicker. But, if a death occurs outside a hospital, even if it’s a natural death, then the police will register the case and begin their investigation. If the body has to be sent abroad for cremation, then there are more formalities involved.

Late Sridevi’s Mortal Remains To Arrive Today, Details About Where & When Last Rites Will Be Performed

Boney Kapoor who is currently in Dubai was also questioned since he was last person to see her alive. However, the Dubai police have ruled out foul play and possibility of any criminal motive behind the death.