Shah Rukh Khan’s wife Gauri Khan hosted a grand bash at a newly launched lounge Arth that has been designed by her in Bandra, Mumbai. The grand party was attended by who’s who of the Bollywood but someone who grabbed all the attention was none other than SRK’s daughter Suhana. Obviously, Shah Rukh looked dapper in all suit up but his daughter Suhana stole the show with her stunning appearance.

Dressed in an orange dress with yellow heels and open hairdo, Suhana looked pretty like never before. SRK, who is quite protective of his daughter, was seen all by Suhana’s side, as they arrived for the restaurant launch event. The Raees actor was seen taking good care of his young daughter. The beautiful teen was also seen greeting Bollywood celebrities while mommy Gauri Khan attended her guests inside the venue. 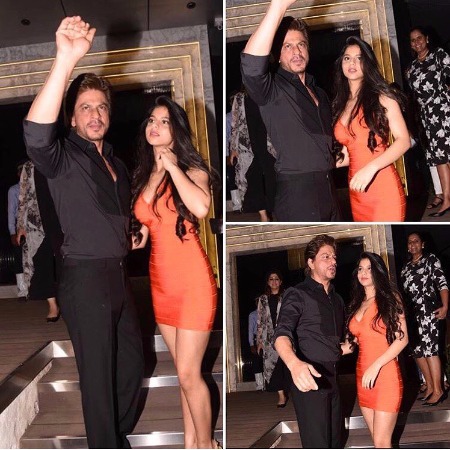 While elder son Aryan Khan’s Bollywood debut is not so far, it won’t be wrong to expect Suhana too making her way in acting.

Others who were present at the bash were Alia Bhatt with alleged boyfriend Sidharth Malhotra, Anil Kapoor, Arjun Kapoor, Jacqueline Fernandez, Sonam Kapoor, Sussanne Khan, Malaika Arora with sister Amrita Arora and many others.

A post shared by JacquelineFernandezfanclub2 ❤️ (@mansijacquelineadorer) on Jun 18, 2017 at 10:41pm PDT

ARTH Bandra mumbai, a must visit to sparkle the soul ❤️???

0 0 0
Previous : Top 10 Bollywood Celebrities Who Are Single, Successful And HOT AF!
Next : PICS: The Royal Nawabi Look of Shahid Kapoor and Mira Rajput At London Wedding Is Redefining Fashion!