Bollywood actor Shah Rukh Khan has started shooting for his much talked next, which is being directed by Aanand L Rai. However, the start of the film did not go well on the sets. Yes, Shah Rukh Khan just had a narrow escape with an incident that took place on the sets of Anand L Rai’s next. Fortunately, SRK escaped the major accident or it could have turned fatal.(Also Read: Tweeple Teach Culture & Dress Sense To Priyanka Chopra For Meeting Modi In Short Dress & Legs Crossed!)

A major chunk of the ceiling collapsed down in Film City in Mumbai, injuring two of the crew members from the sets. They were instantly taken care to the hospital for the treatment and then discharged later in the day. 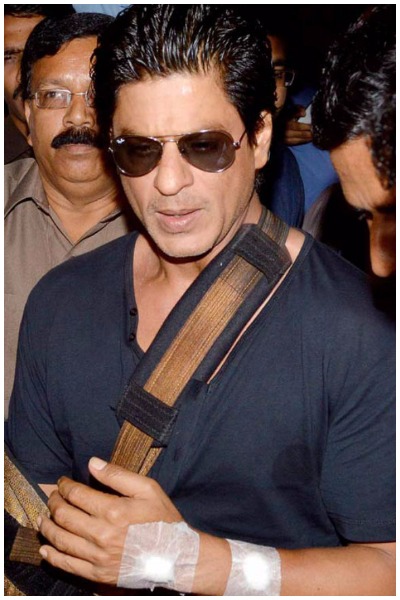 A source told Mumbai Mirror, “A prop ladder fell on the makeshift ceiling. The injured crew members were discharged immediately since the injuries were minor. Everybody heaved a sigh of relief that SRK was seated on another side of the set and was unharmed. Shooting was stalled for two days and will resume later this week.”

Well, Shah Rukh Khan and injuries have a very old relation and going by its history, we are happy that he escaped this one. We hope that that makers of the film, hereafter take safety care of the whole crew and cast on the film sets.

Trending – Baahubali 2 Star Prabhas To Marry Granddaughter Of An Industrialist?

Talking about Shah Rukh Khan’s film, the superstar will be seen as a dwarf, alongside Katrina Kaif and Anushka Sharma. We are eagerly waiting to get a glimpse of King Khan in his new avatar for the film. Not much about the film has been revealed but it is said to be one of the most challenging roles of his career.