Sushmita Sen, a woman who has set paradigms of beauty, inside out. A woman, who has taught confidence to a whole generation of females, who had self-doubts hovering like dark clouds over their beings. A beauty queen, a social activist, a single mother and a wonderful human being, there are no less adjectives to describe her. Apart from that, she is also someone who does not hide her emotions behind the facade of artificial poise and calm, and when she expresses, it is raw and gorgeously beautiful.

Something similar happened, when Sushmita met not one, not two, but four Filipino girls who were named after her.

We all know that Sushmita was recently judging the Miss Universe pageant in Philippines, which coincidentally is the same country where she won her own title, 24 years ago, in the year 1994. On her trip, during one of her interviews where she bared her soul on a variety of topics, all surrounding her life post her title and her achievements, little did she know that she was in for a delightful surprise. 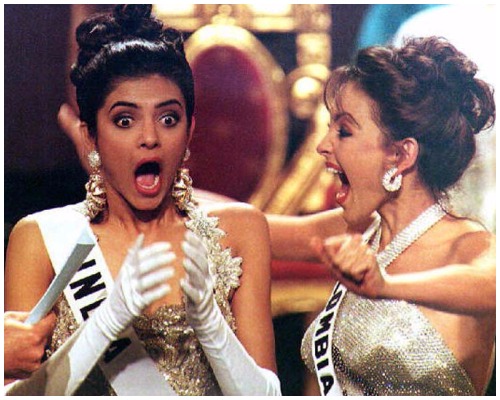 One after the other they walked in. The four Sushmitas who were born the exact day when Sushmita was crowned, were standing before her in flesh and blood, flaunting the legacy that this Miss Universe from India had left behind for them.

Sush was so overwhelmed that she could not bring herself to speak, but when she did, all she could say was “What! You are all Sushmitas?” and then she went on to explain the meaning of the name itself, which is a ‘beautiful smile’ and how they all were their namesakes, with smiles that shined.

Watch the video below and experience the magic of that moment.

0 0 0
Previous : Lakme Fashion Week 2017 Day 1: Varun Dhawan Brings A Surprising Twist As He Walks The Ramp For Kunal Rawal!
Next : Is This The Bollywood Movie Priyanka Chopra Is Going to Make Her Comeback With?