She is the vivacious actress who was introduced to us in the sports drama ‘Chak De! India’ as a feisty hockey player, he is a cricketer everyone revers and girls swoon over. Though there are many such Bollywood-Cricket love sagas known, here, we are talking about Sagarika Ghatge and Zaheer Khan. (Also Read: Top 10 Viral Bollywood Photos That Broke The Internet!)

Yep, rumours were doing rounds that this Bollywood belle is dating the dashing cricketer, and the paparazzi sure went wild when they were spotted hand in hand at the wedding of Yuvraj Singh and Hazel Keech, last year. However, Sagarika has finally spoken up on the matter. (Also Read: Wedding Bells! Rohit Sharma married to Ritika Sajdeh) 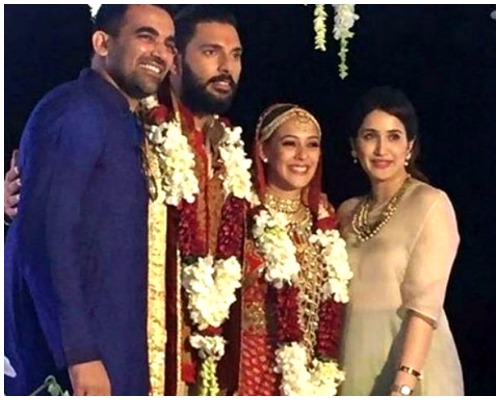 On being further probed as to how does it feel to date a cricketer, she added, “I will remain just the way I am: low profile as ever. Why should I be any different just because I am linked to someone? I am not the kind who can put up a farce. I have no shame in admitting that I draw into my shell easily and come out only when I have to speak. I have big respect for Zaheer’s game and before you ask, yes he will watch my film (Irada) when it releases.”

Well, that’s one diplomatic answer. We will, however be waiting for the day when these two will come out in the open and accept that they are in a relationship. (Also Read: Is ‘Dangal’ Star Aamir Khan Moving To Hollywood? Read Everything About His Plans Here)