Finally the much awaited biopic of master blaster Sachin Tendulkar’s release date is out and that too with the new poster. The movie will release on May 26 with debut Sachin as an actor. The movie will not only depict the cricket life of 43 years old Sachin but will also talk about the virtuous of other cricketer’s life. The movie will tell us about how Sachin changed the cricket game, united our country and hailed for his success. (Also Read: 8 Facts About Mahendra Singh Dhoni That We Would Love to Watch in His Sushant Singh Rajput Starrer Biopic) 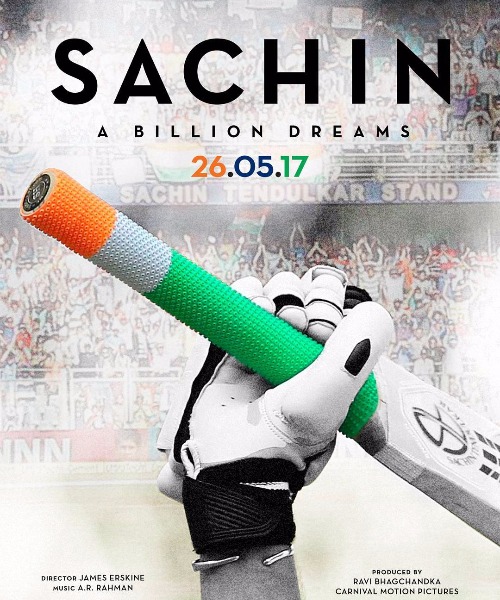 The teaser which came out in April 2016 showed the childhood life of Sachin, his father’s message on leading life and the crowd at Wankhade stadium cheering for Sachin. We could not contain our excitements after watching the trailer and were eagerly looking forward for the release date; which is out now after 10 months. This is Sachin’s first debut in acting which will clash with Priyanka Chopra’s first Hollywood movie debut Baywatch. The competition is real tough as both the personalities have huge fan followers. (Watch: Once Again Priyanka Chopra Bags International Award at PCA 2017 for Dramatic TV Actress)

Here is a teaser if you missed watching –

The new poster is patriotic in design depicting our national flag tri-color’s on the bat’s handle along with release date. Also seen behind is Wankhade stadium with huge crowd. On acting, Sachin Tendulkar said, “For so many years, I did whatever I wanted to do and the camera captured that. Suddenly I was asked to do particular things and then the camera captured that, so it was a bit different for me. Believe me, the first option was better… Acting is not something that I dreamt of. Without any doubt, acting was more challenging than playing cricket. I enjoyed playing more.”

Sachin took his IG account to share the new poster with the release date giving the caption as “The answer to the question that everyone’s asking me is here. Mark your calendars and save the date. @SachinTheFilm releases 26.05.17”. Yes Sachin, our calendar’s are marked!

The answer to the question that everyone's asking me is here. Mark your calendars and save the date. @SachinTheFilm releases 26.05.17

The release date of movie is May 26, 2017. The summer’s are going to be really hot and are all excited to watch the biopic of this legend in theaters. Share your thoughts with us in the comments box.

0 0 0
Previous : Koffee With Karan 5: Alia Bhatt and Varun Dhawan Just Nailed It With Their Bold Confessions!
Next : #RomanceLikeSRK: Does This Tweet From King Khan Means That He Will Do Romantic Valentine’s Messasge For Us?