Earlier this month, California Wildfires rage gulped thousands of homes and took away lives of hundreds of people. General public as well celebrities evacuated their homes and lost their properties to fire.

Reality star Kim Kardashian and his rapper husband Kanye West made a generous donation in the wake of recent California Wildfires. Kanye raised $5,00,000 through his clothing line ‘Yeezy’ in collab with Adidas. 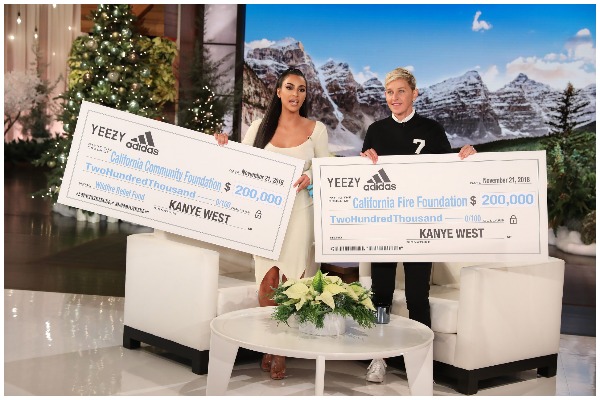 One of the firefighter lost his own house in Oak Park while keeping people safe out of Woolsey fire in Southern California. Kim on the Ellen show donated $100,000 to firefighter Michael Williams and his wife Lisa for their selfless service.

Here is the video of Kim Kardashian’s donation to firefighter Michael Williams from The Ellen’s show.

Kim Kardashian and Kanye too lost their house at nearby Hidden Hills.

I heard the flames have hit our property at our home in Hidden Hills but now are more contained and have stopped at the moment. It doesn’t seems like it is getting worse right now, I just pray the winds are in our favor. God is good. I’m just praying everyone is safe ??

“We were lucky. I feel like we were really blessed to have the help of the firefighters that we did,” she said. “Because of them, they saved our home and saved our neighborhood … I don’t take that for granted, and that was such a blessing that we were able to do that.”