Priyanka Chopra is currently in Germany with her Baywatch team for the movie promotion. Her Instagram account is telling us the life Priyanka living and having fun time in Berlin. It happened to be a co-incidence that our PM, Narendra Modi too is in Germany.(Also Read:Baahubali 2 Star Prabhas To Marry Granddaughter Of An Industrialist?)

Priyanka Chopra and PM Modi met in Berlin for a short time out of their busy schedule. For which, Priyanka Chopra also put a pic on her Instagram account thanking Modi for taking time from his packed schedule to meet her. “Thank you for taking the time to meet me this morning Narendra Modi Sir. Such a lovely coincidence to be in Berlin at the same time,” wrote Chopra.

Was such a lovely coincidence to be in #berlin?? at the same time as the Prime Minister. Thank you @narendramodi Sir for taking the time from your packed schedule to meet me this morning. ??

The 34-year-old actress rose to international fame after giving a super hit American series Quantico and then making her first Hollywood movie debut Baywatch. She was just there in Berlin for her movie promotions and PM Modi for his work visit. The two being in the same city was a co-incidence and who would not love to meet and greet Modi? So did Priyanka Chopra happened to hang out with Modi in Berlin. (Watch: Priyanka Chopra REVEALS About Having Ex-Boyfriend’s Jacket And Apparently Belongs To A Superstar!)

Well, what didn’t go well with our twitteratis was Priyanka Chopra’s dress. She was trolled for her inappropriate dress sense for meeting PM. She was shamed and taught her sanskars on Indian culture and showing her legs. Not just Twitter, her FaceBook account too is fired with hundreds of comments from men and women for sitting her legs crossed in-front of Modi. 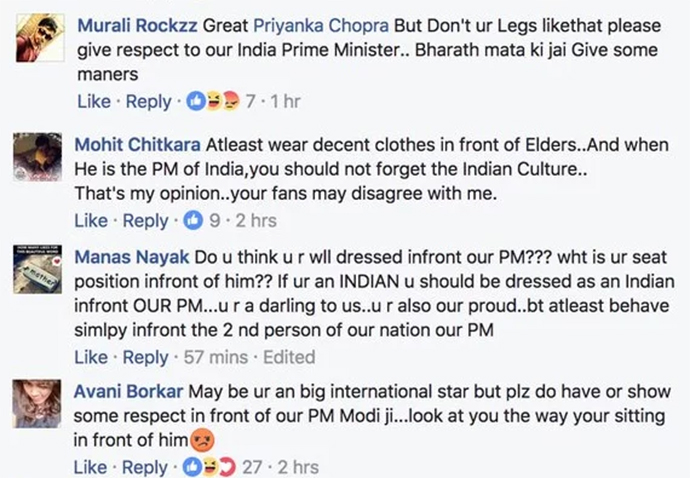 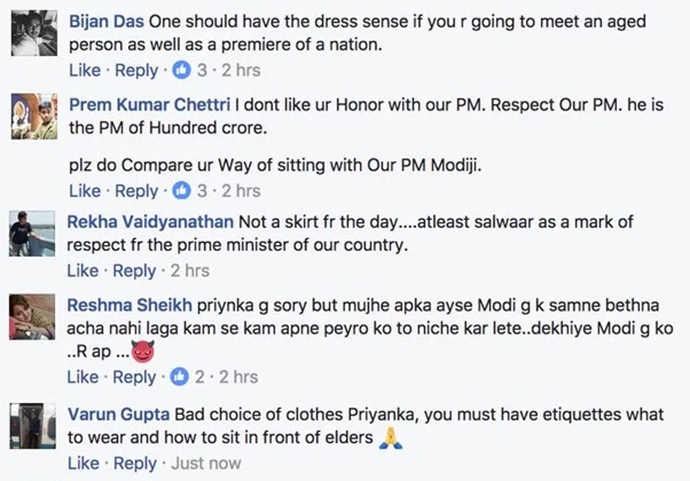 We don’t think that PeeCee wore something not respectful. It may have happened that she wore the dress that she wanted to for her movie promotions and didn’t get a chance to think on what to wear for meeting with PM Modi. Some people always spit venom no matter what.

What is your say on Priyanka Chopra shamed for showing her legs in front of Modi ? Tell us in the comments box.