Earlier in the morning, Karan posted a video on his Instagram story, singing himself with his mother; ‘happy birthday’ for the tiny tots and the kids also looked super excited. Along with the video Karan, wrote, “Excuse my besura singing”. In the video Yash playing with a bunch of Balloons, while Roohi tossed her school bag to express her happiness.

As the twins returned from their school, daddy Karan Johar hosted a grand birthday party in the evening. Dressed in red and blue jerseys, Roohi and Yash looked super excited as they celebrated their birthday party with their friends. Guess what, Yash and Roohi invited their Bollywood buddies on their birthday including SRK’s son AbRam, Shahid Kapoor’s daughter Misha Kapoor and Kareena-Saif’s son Taimur.

Karan Johar Pens An Emotional Letter For Twins Yash-Roohi, Says ‘I Owe You My Life’ Varun Dhawan and Mira Rajput were also seen at the birthday party of Yash Johar and Roohi Johar.

The pictures from the birthday celebration is going viral on social media, which shows the two adorable twins cutting the three-tier cake with their daddy.

Too cute for words! @karanjohar shares an adorable moment with children #RoohiJohar and #YashJohar at their birthday bash.

In one endearing photo, the twins can be seen playing all covered with colorful balls. 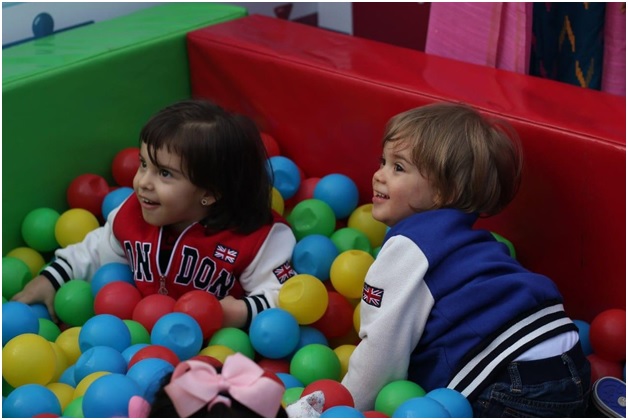 Varun Dhawan was clicked with Yash and Roohi as he played with the toddlers.

Many Bollywood celebrities shower their love and best wishes for the Birthday kids. Actress Neha Dhupia wished Yash and Roohi on behalf of her newborn daughter Mehr. She posted a picture on Instagram, in which she, Angad Bedi and little Mehr posed with the Johars. She captioned the picture as, “Happy birthday, my dearest Roohi and Yash… I still remember the first time we met and both of you screamed out loud, “Bbbbaaaaabbbbbyyyyyy”…. I may not be joining you for your birthday celebrations this time as I will be busy but I promise I’ll create havoc with you very, very soon.”

#happybirthday my dearest Roohi and Yash ? … I still remember the first time we met and both of you screamed out loud … “bbbbaaaaabbbbbyyyyyy”…. I may not be joining you for your birthday celebrations this time as I will be busy ? … but I promise I ll create havoc with you very very soon… ❤️ @mehrdhupiabedi