Iconic Indian actor Shashi Kapoor passed away on Dec 4 in Mumbai. The fans are still mourning over the loss and twiterrati are paying tribute and expressing their condolences, Times Now Channel did a major name goof-up. 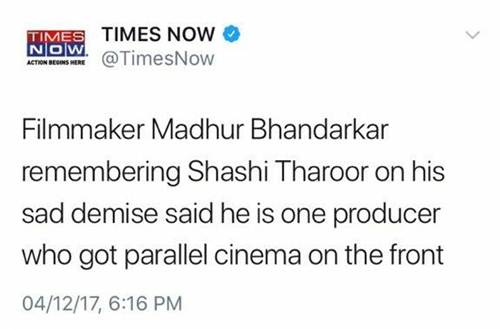 When the name goof up came to Shashi Tharoor’s attention, he tweeted a witty message saying, “We’re getting condolence calls in the office! Reports of my demise are, if not exaggerated, at least premature.”

We're getting condolence calls in the office! Reports of my demise are, if not exaggerated, at least premature. @TimesNow #ShashiKapoor https://t.co/nbtZGcdQTa

Following to which, Times channel and The correspondent of Times apologized Shashi Tharoor with a tweet:

Mr @ShashiTharoor we humbly apologise for our mistake. Wish you a very healthy life. https://t.co/uV8exqvHNK

We apologize for the typographical error on our end. @ShashiTharoor we wish you good health.

And Sashi Tharoor gave a reply,

Thanks. No problem. Mistakes happen. Glad to be able to crack a smile at a tragic moment. https://t.co/3VxIpZ5yED

Shashi Tharoor also paid his condolences to Shashi Kapoor with a pinch of humor in it –  “I feel a part of me is gone. A great actor, smart, cosmopolitan, impossibly handsome & w/a name that was often confused w/mine. (My office got two calls from journalists today about my reportedly serious ill-health!) I will miss #ShashiKapoor. Condolences2his family&all his fans”.

The twitterati trolled the media house left, right and centre for name goof-up over such sensitive news. Realizing their fault, they immediately deleted the tweet and took another tweet where they apologized Mr Tharoor.

This is not for the first time that Times media house in a hurry burry did a name goof up. The demise of Vinod Khanna’s news too was goofed up and cricketer Vinod Kumble started receiving condolences messages on internet.