The “A Star Is Born”, star Lady Gaga sparkled the 2019 Oscars red carpet with her elegant look. The nominee for Best Actress and Best Song, charmed with her beauty in Alexander McQueen’s black gown, completing her looks with oversized hip pads, elbow length gloves and the sleek updo.

With this, the accessories worn by her attracted the attention of everyone. And this is a 128.54-carat Tiffany & Co yellow diamond necklace called “the Tiffany diamond”, worth of 30 million US Dollars i.e. 2 billion INR.  Gaga also wore matching earrings featuring yellow and white diamonds. 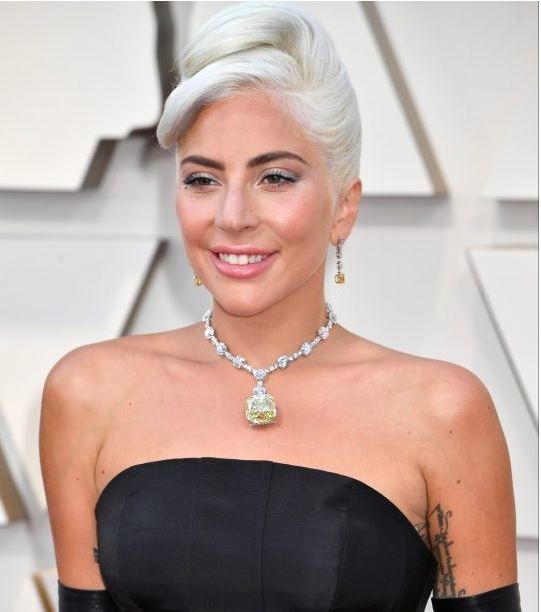 Lady Gaga was the third person to wear this necklace. The first person was Mrs. Sheldon Whitehouse in 1957 and the second wearer was Audrey Hepburn in 1962.

In addition to the Tiffany Diamond, the necklace also features 16 cushion-cut diamonds and 46 round brilliant diamonds.

The necklace was designed by New York’s Famous Luxury Jeweler Company ‘Tiffany & Company’. According to reports, this is the biggest deal ever designed for a Red Carpet outfit.

Tiffany & Co’s artistic officer Reed Krakoff said: “Lady Gaga is the ultimate creator, innovator and rule breaker, and I’m thrilled that she will be wearing the legendary Tiffany Diamond on the awards show red carpet for the first time since it was discovered 141 years ago.”

Well, besides the Gaga’s ravishing red carpet look there was another highlighting moments from the ceremony which is breaking the internet right now. It was Lady Gaga and Bradley Cooper’s surprise stage performance “Shallow” from their film “A Star Is Born”.

Although Lady Gaga’s “Shallow” won an Oscar for the Best Original Song and their chemistry during performance set the mood for the night and fans fell in love with the pair once again. It was treat for the Oscar audience to watch them performing live.

Something major just happened. After “Shallow” perf, @ladygaga & Bradley Cooper exited stage for commercial break. During break, they came back to their seats from stage then audience gave them another standing o. I’ve never seen that happen for any performers. Cue embrace#Oscars pic.twitter.com/k9wNh66tn1

Lady Gaga and Bradley Cooper about an inch away from a whirlwind love affair on live TV. #Oscars pic.twitter.com/FGFPfM63Uo

ok but the chemistry between lady gaga and bradley cooper #Oscars pic.twitter.com/AqROXM3lI9

Why yes I did scream “KISS!” from the balcony of the Dolby Theatre

Why am I trying to give a standing ovation in my apartment on my fractured foot after #LadyGaga and #BradleyCooper's performance of #Shallow at the #Oscars ? Cause it was bonkers, beyond and insanely amazingly good. Though I applauded seated, the standing O was there in spirit.

Their chemistry/attraction while performing with each other gives me some serious Johnny & June vibes.