Kylie Jenner’s allegedly pregnancy has become a social media discussion. Instead of giving out the statement to put the matter to rest, Kylie is seen in a mood to tease her fans and followers with her latest Instagram pic. A few hours back, she posted a pic on her Instagram handle in which she have lifted her sweat a bit and showing off her bare stomach.

yesterday was cute. hope you had the happiest of birthdays Jordy. Love you forever ever and beyond..

If you look at the picture, you will be enough convinced to believe that she is not pregnant. So does it mean that she purposely uploaded this picture and cornered the rumours of her pregnancy at bay? May be, May be not!

Since Friday, the fans and media are following Kylie and looking for an evidence to confirm if she is pregnant at all.

Some Sherlock Holmes brains’ are convinced and pretty sure that Kylie is preganat as she had posted a pic in the August month where she was seen holding her stomach.

If you go logically with all these facts, Kylie should be already four months pregnant.

Last week, it was TMZ who first published saying the 20-year-old Kylie Jenner began telling friends she was expecting. Till Kylie makes any official announcement on this,  fans and social media are literally eagle-eyed trying to spot baby bump.

A close source of Kylie Jenner told, “They started telling friends a few weeks ago. The family has known for quite some time. She is really excited and so is Travis!”

Sources claim the baby is due in February.

There is also this latest picture of Kylie with her friends moving around the city in a baggy t-shirt and loose pants. Kylie Jenner’s pics are all just creating more curiosity. We guess only Kylie Jenner can make it clear through her official announcement if she is pregnant or not. 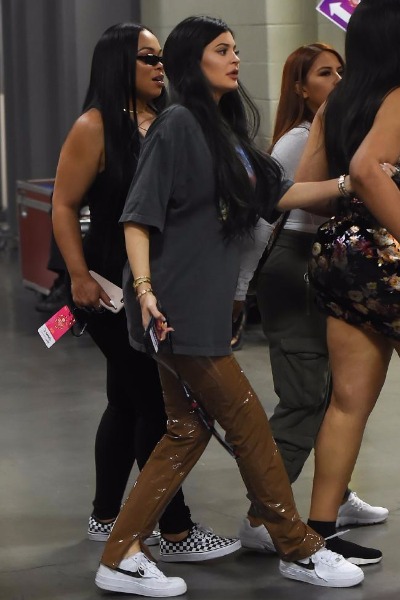