Indian film director and producer Karan Johar is everyone’s favorite in Bollywood. He is such a sporty who do not hesitate to put his dancing feet on floor whenever there is a chance. Karan Johar alongside Varun Dhawan and Jacqueline Fernandez is in full swing practicing for Sonam Kapoor’ sangeet night, which is tonight.

The Kapoor’s Juhu residence is currently packed with guests and Bollywood actors who are flocking in and out. Sonam Kapoor has invited almost everyone from B-town including a special phone call made by her to Aishwarya Rai.

The weeding of Sonam Kapoor is been continuously trending from last few days. Sonam have been receiving loads of pre-wedding gifts from her friends and brands , from flower bouquets to cup cakes, earrings to shoes, customized tees to what not. But Karan Johar’s gift to Sonam Kapoor on her wedding had our eyes pop out and expression be like wow!

A source told, “For Sonam Kapoor’s special day, Karan Johar will be gifting her Amrapali Jhumkas, a pair of silver kadas and uncut diamond chandelier earrings. Both the jhumkas and the kadas are silver coordinated sets. Apart from this jewellery, Karan has also brought a Kanjeevaram saree for the bride to be! That’s not all. KJo has custom ordered a thali full of motichur laddoos that would be flown in from Nathus in Delhi.”

This is how a good old close friend gifts, isn’t it!

There is also this special gift Sonam Kapor received, a delicate bracelet from Ranbir Kapoor’s sister Riddhima. Sonam Kapoor shared a picture of an emerald bracelet designed by Riddhima, who is a jewellery designer. 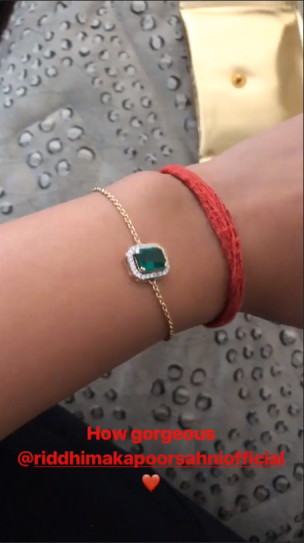 Sonam Kapoor is getting married on May 8 at her aunt Kavita Singh’s heritage mansion, Rockdale in Bandra, followed by a lavish reception in The Leela. Soon after the wedding, Sonam will walk the red carpet at Cannes International Film Festival on May 14. Reportedly, Sonam Kapoor and Anand Ahuja have postponed their honeymoon at the and of the year, as Sonam will be busy in the promotions of Veere Di Wedding followed by shooting Shelly Dhar’s ‘Ek Ladki Ko Dekha Toh Aisa Laga’, which also starrs Sonam Kapoor’s dad Anil Kapoor.

0 0 0
Previous : Revealed: Sonam Kapoor’s Wedding Lehenga Is Designed By These Three Designers
Next : Sonam Ki Mehendi: Inside Pics Of The Rocking Bride and Her Veeres Having Blast