Jennifer Lopez aka J. Lo is engaged  with boyfriend Alex Rodriquez aka A. Rod .

‘She said yes’ this is what we were dying to hear for A. Rod and J’Lo. The celeb couple have been dating from the past two years while the fans were wondering when the announcement will come through. The couple broke the news about their engagement simultaneously on Saturday with a beautiful picture of the big rock against the sunset. Jennifer Lopez posted the picture on oner Twitter and Instagram with a number of red hearts. Whereas, Alex posted with a simple yet meaningful message which res, “She said yes”.

The 43-year-old former New York baseball shortstop star proposed to the 49-year-old singer and actress during a trip to the Bahamas.

“Even though this trip to the Bahamas has been planned for a few weeks, friends had no idea that Alex would be popping the question this weekend,” a source told E! News on Sunday. “Alex kept all of the details surrounding his ring shopping and his proposal very private—almost everyone in their inner circle was caught by surprise when Jennifer posted the photo of the ring.”

The massive ring which Alex Rodriquez proposed to Jennifer Lopez with is estimated to be be worth of atleast $1 million to $5 million of range. This huge emerald cut diamond engagement ring was popular way back in 1920s and went on to become high profile celebrities favorite after Amal Clooney and Beyoncé made it popular.

The fans left swooned over the big diamond rock on her hand standing out of the images the two had posted. Recently, they celebrated their 2nd anniversary of being together on 3rd Feb. While we wait for another big announcement taking their relationship to another level,  let’s just talk about ‘Oh-My-God-That-Ring’ until then.

J. Lo and A. Rod had been in the wedlock before but unfortunately did not work for them. Jennifer has been married thrice and was also in a relationship with the Batman star Ben Affleck which did not work through. Jennifer has kids from her marriage with Marc Anthony that had ended in the year 2014. Alex, known for his baseball player which he has now retired from has tied in past with Cynthia Scurtis. The two split in the year 2008. Alex has two lovely daughters from his marriage to Cynthia. 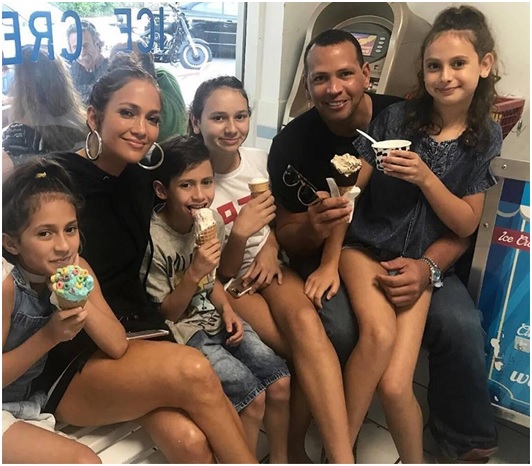 Destiny had different plans for both of them it seems as they were meant to be together. The two’s -Alex, 49 and JLo, 43 Instagram pictures of them together have time and again proved their love and chemistry with each other. It is not just them but their respective kids also gel great together.

Jennifer’s twins, Max and Emme and Alex’s daughters almost belong to the same age group. The kids happen to bond really well together. The six of them have shared pictures of their outings together before. They have been to games together and brought in different occasions together. Jennifer had mentioned how close the kids are to each other in an interview before. The family does look extremely good together and seem very happy in their space.