The release of Bollywood actress Priyanka Chopra’s Hollywood debut film ‘Baywatch’ is just a few days away and the actress is currently busy with the promotions in the US. The makers of Baywatch also hosted the world premiere of the film in Miami, which was attended by the whole cast and crew. Priyanka also shared her golden moment from the premiere night as she posed for the shutterbugs with Hollywood co-stars Dwayne Johnson, Zac Efron, Alexandra Daddario, Kelly Rohrbach, Jon Bass and Ilfenesh Hadera.(Also Read: Priyanka Chopra On Nepotism: I Was Kicked Out Of Films Because Someone Else Was Recommended)

The Bajirao Mastani actress Priyanka looked drop-dead gorgeous in a shimmery dark blue gown with a thigh-high slit. With her neatly tied, Priyanka rocked the red carpet look like a boss.

That is a lot of love from south beach! Thank u for the loud cheers and love! Always love me Some #Miami #may25th #baywatch @baywatchmovie 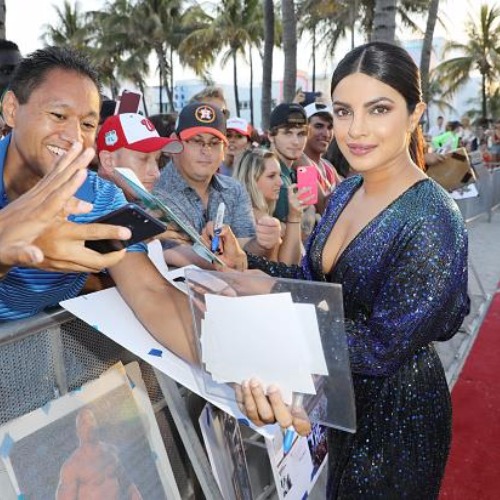 That’s not all; the highlight of the night was when Dwayne Johnson greeted Priyanka Chopra with a sweet peck on the cheek. While fans couldn’t hold their excitement, PC herself left surprised. The video of “the Rock” kissing Priyanka is currently ruling the Internet. What a sweet gesture, isn’t it?

Speaking about her experience on the sets of the film, Priyanka said at the premiere on Saturday, “We got on really well, though I tried really hard to be a jerk, I couldn’t because everyone was super fine.”

“Also, I was flying in and out as I was shooting ‘Quantico’ and ‘Baywatch’ together. But I did try to go a little method in my walk and in my talk. I am happy to be here. ‘Baywatch’ is great summer fun. By the way, don’t take your kids (to theatres),” she added.

Baywatch is releasing on May 25 in the US and on June 2 in India.