Pakistani actor Fawad Khan who also gave few super-hit movies in Bollywood with the recent one ‘Ae Dil Hai Mushkil’ have named his second child. Fawad Khan, who is been married for 11 years with his teenage girlfriend Sadaf are already a blessed couple with their first child Ayyan Khan who is 6 years old.

Fawad Khan’s Instagram Fan page revealed the pic and broke this news to us. Take a look. 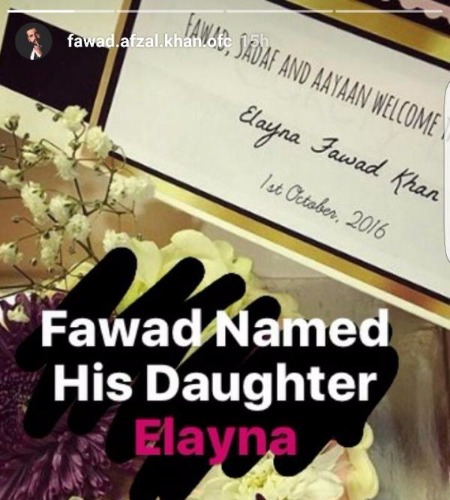 Fawad Khan Has Finally Something to Say on The Recent India-Pak Events, and You Should Listen to Him

0 0 0
Previous : Priyanka Chopra Sings Her First Marathi Song #Baba is So Beautiful It Will Bring Down Tears
Next : Deepika Padukone Opens Up About Her Rift With Priyanka Chopra In This Interview