Bollywood actress Esha Deol is beaming with joy and emotions as she is blessed with a baby girl early Monday morning. Esha Deol and husband Bharat Takhtani welcomed their baby girl at Mumbai’s Hinduja Hospital where members from both the families were present. Congratulatory messages for the couple have been flooding on social media since morning.

Just minutes ago, Esha along with husband Bharat and their little baby girl stepped out of the hospital to pose for the shutterbugs: 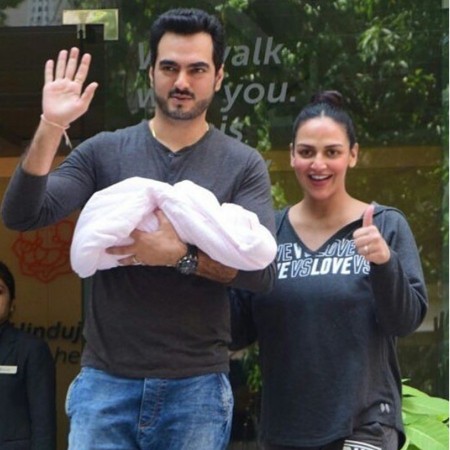 Esha had announced her pregnancy in April this year and was seen flaunting her adorable baby bump throughout these nine months. The actress has enjoyed every bit of her pregnancy phase and her baby shower pictures are a proof.

Diwali nights with loved ones @ektaravikapoor with my Jaya aunty, Ahaana & @bharattakhtani3

Out now on stands! @healthnutrition_india …Some healthy talk, some fun talk, some ready to be a mummy talk , basically my personal experience through these awesome months of carrying my first child ???

Throwback bk 2 a few weeks bk when RockyS surprise visited me for fittings of the lavender gown gifted by my sister ???? precious moments! @rockystarofficial @a_tribe #ThursdayThrowback

With the arrival of Esha’s little bundle of joy, Hema Malini becomes the grandmother for the second time, two years after her younger daughter Ahana welcomed her first child named Darien.

As the couple enters the new phase of their life as parents, we wish them love and lots of best wishes!