Our heart is wrenching and crying out loud for this little beautiful 8- year-old Asifa who got brutality murdered. The death of 8-year-old has not only shaken India but the news is spreading like wild fire across the globe.

8-year-old girl Asifa from the Kathua district, Jammu and Kashmir was kidnapped, sedated, brutally gang raped for days by six men and then finally murdered. The child’s rape and murder sends a chill down our spine and making us think how many more Nirbhaya’s will cry for justice?

According to reports Asifa was held in Hindu temple, which in-turn is fueling religious tensions between Hindus and Muslims in India. The crime branch of Jammu and Kashmir has filed two separate charge sheets against the eight accused.

Outraged with such inhumane event, Celebrities are expressing their anger on social media and demanding justice for Asifa Bano on Twitter with a hashtag #JusticeForAsifa. From Bollywood celebrity Sonam Kapoor to spiritual leader Sri Ravi Shankar, here is what they have to say about Asifa Bano –

These are not human beings, they are demons. The entire country should stand for #JusticeForAsifa. It is horrifying that such a crime could happen in India, that too in a place of worship. #AsifaBano

This is beyond horrible. How can anyone in their right senses defend these monsters? #JusticeforAsifa #JusticeforHumanity https://t.co/54dBAdECXu

Heart- wrenching knowing about what they did to an 8 year old. They are not humans. An 8 year old kid has had to bear the brunt of the system. Every human being would want #JusticeforAsifa and this justice should not be delayed. pic.twitter.com/LDa1dEfxct

Shame. Shame on us for letting religious & political issues come in the way of humanity. Shame on us for waking up to this heinous crime months later,after international media has highlighted it. Shame on us for not being able to protect the girls of our country. #JusticeForAsifa

"We demand that strong punishment should be awarded to all the accused and justice delivered to the victim family"
Would really request the government to please have strict rules for such a crime..#JusticeforAsifa

An 8 year old girl was gangraped & murdered in a temple because she belonged to a Muslim tribe that Hindu right wing goons wanted evicted from their area! #Kathua #India this is on us!!!! If in #Delhi pls join TODAY #JusticeforAsifa pic.twitter.com/D8GTf3gYMl

I can't breathe after reading this. I need to share it. And so do you. Please do. #JusticeforAsifa https://t.co/tPKXuDcRX6

Heartbroken and at loss of words at the horror 8 year old Asifa had to endure. Its a murder of humanity. Justice must be delivered.

Don’t know who to say what to.. don’t know if making a statement on social media is in anyway a contribution to retribution.. it has happened before .. it has happened again .. how will it stop ?? Extreme Examples have to be made .. #JusticeforAsifa #Kathua #Unnao pic.twitter.com/bFOoTWxfcI

Imagine what goes through the mind of an 8 yr old as she is drugged, held captive, gang raped over days and then murdered.
If you don’t feel her terror, you are not human.
If you don’t demand Asifa get justice, you belong to nothing.

Yet again we've failed as a society. Can't think straight as more chilling details on little Asifa's case emerge…her innocent face refuses to leave me. Justice must be served, hard and fast! https://t.co/xrW5RVffLe

Ashamed appalled and disgusted by fake nationals and fake Hindus. I cannot believe this is happening in my country. https://t.co/V8tKoo6viX

Humanity has it an all time low …. only one path to redemption #JusticeforAsifa …

All those who wish justice for women should stand up and raise their voices against the rapists and their protectors in Unnao and Kathua .

A 8 year old is drugged, raped & murdered and another one is fighting for justice for herself and the death of her father in custody.
We have a choice either raise your voice or be a silent spectator.
‘Stand up for what is right even if you are standing alone.’#Kathua #Unnao 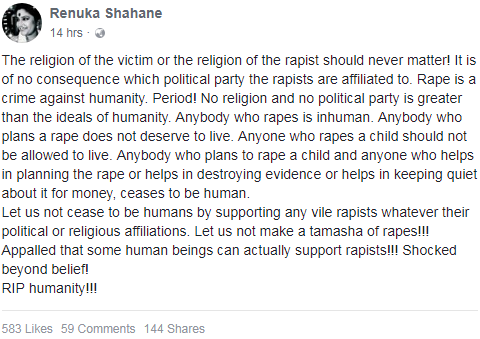 The brutal rape and murder of an 8-year-old girl in India has sparked protests and outrage. Remember, no religion and country preach you to become a monster and hurt more Asifa’s or Nirbhaya’s from India or be it a 7-year-old girl Megan Kanake from US for that matter. This can happen anywhere, and we purely need humanity and justice, not religious and political blame game.