Deepika Padukone is slaying Vogue November cover magazine with Sabyasachi’s green ensemble. If we talk about Hollywood, we obviously get these two names Deepika Padukone and Priyanka Chopra into our minds who are striving hard to imprint their foot in deep. With both of them giving a powerful action-thrill-suspense sides of their character, they are reaching everywhere to promote their upcoming releases. 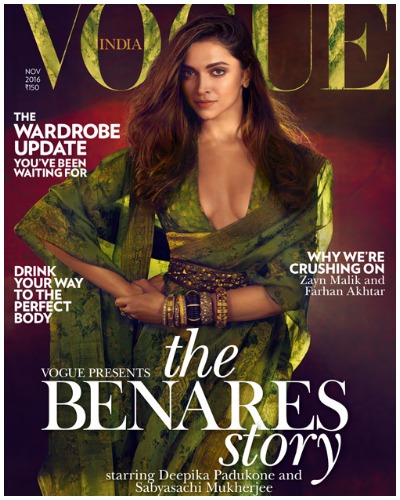 Also Read: Watch: Deepika Padukone Break Down In Tears While Talking About Depression!

Well, with both the leggy lass are trying their lucks in Hollywood, there is been rumours and gossips airing that Deepika and Priyanka are having a great rifts. The Bajirao Mastani girls, who shared a good friendship chemistry over a year ago on the sets are under radar now if everything is ok between these two. However, Deepika has opened up about her relationship with Priyanka in the Vogue interview.

“We have had very different beginnings. I still remember I was in school when she won Miss World! I’ve known her for many years and nothing has changed.” Rejecting the notion that the two actors are in competition over similar career trajectories, Padukone insists that “everyone will have a different path and a different journey.” “What she wants from her career will be very different from what I want and that needs to be understood and respected,” she says.

She added, Is it lonely at the top? “Well, I wouldn’t know. My focus has always been on the journey… on doing good and challenging work and enjoying the process” .

Form the work front, Deepika is geared to work with Sanjay Leela Bhansali’s Padmavati with his boyfriend Ranveer singh. She is 10th number on Forbes for richest actress in the world(the only Indian on the list).

What do you think? Is all well between Deepika and Priyanka?

0 0 0
Previous : Fawad Khan and His Wife Have Named Their Little Princess With This Unique Name
Next : Who Wore What: Bollywood Stars Dazzle At MAMI Film Festival 2016!