Coachella should be renamed as “Beychalla” after Beyoncé’s jaw-dropping performance on Saturday night at Coachella featuring Destiny’s Child reunion, JAY-Z, Solange and more.

Beyoncé, 36, made a history becoming the first African American woman to headline Coachella at Californian music festival. After waiting for a year, Queen Bey finally made it to the Coachella and had us conquered with her knockout performance. The internet has literally renamed the Coachella after Beyoncé as ‘Beychella’.

Prior to hitting the stage, Beyoncé had promised her fans and followers on FaceBook that her Coachella performance will be energetic. She had written,  “I am so excited to see the BeyHive tonight at Coachella,” she wrote in a Facebook post hours before she took the stage. “We have been working hard and have a special show planned for you so please be safe and stay hydrated. We need your energy! There will be an hour intermission before my performance, so mark your spot, charge your phones, grab your drinks. Can’t wait to see y’all at 11:05pm!”

She did literally stand to her words. Didn’t she!? Bey opened up the performance saying, “Thank you for allowing me to be the first black woman to headline Coachella,” to the crowd.

“This is a very important performance for me … do we have any strong women out there tonight?”

The superstar singer/songwriter had to cancel her last year commitment of Coachella performance as she was pregnant with twins. Lady Gaga stepped in replacement of Queen Bey. Well, she made it up this year with a power-pack performance for a straight two hours of live performance.

From debut of her own in-house band of drummers, brass players, violinists to wearing 5 different Balmain’s outfits during her performance, the internet is buzz with Bey’s performance and having her own army of 100 back dancers for Coachella.

The power couple – Beyoncé and her partner Jay Z performed Deja Vu together. Isn’t this is enough to conclude that the couple together will rock On the Run Tour sequel coming ahead.

Beyoncé and Jay-Z performing Deja Vu. I love their chemistry. This song will forever be a bop #BeyChella pic.twitter.com/8AajdvPkLX

Sisters Beyoncé and Solage joined for a dance-off on a extended version of “Get Me Bodied”. The iconic sisters madly performance with the crew of 100 dancers was so so magnificent. Beyoncé hired 100 dancers for her performance at the Coachella Festival!Rehearsing about 11 hours a day in a single stretch.

the iconic sisters did that! #Beychella #Beyoncé #Solange #Coachella pic.twitter.com/2uPvVNnXGF

We had our jaws dropped when saw Beyoncé in a custom made Bahmain’s Egyptian goddess cape. Oh ya, so did Jay Z was after seeing his Queen Bey in that dress at Coachella stage.

Rousteing told Vogue of the costumes, “Jay saw the Egyptian goddess cape and when B put it on, his eyes went wide and he was so excited, he said, ‘Oh, wow!’ That gave me a lot of satisfaction.” 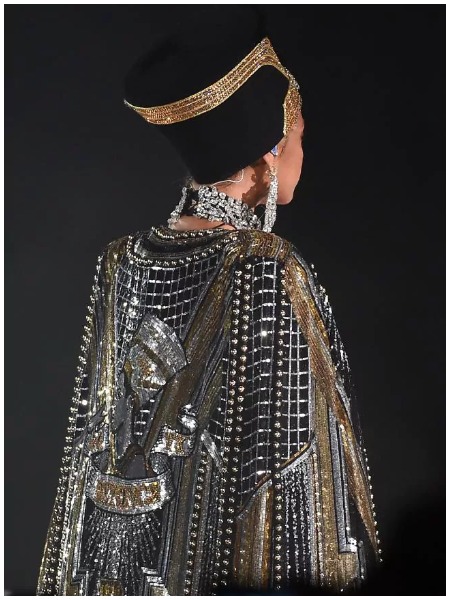 Last but not the least, the African American also sung the Black National Anthem, mixing it with her own song “Freedom.”

From distressed denim paired with yellow hoodie to black bodysuit, Beyoncé had us drolling over her performance and appearance from Coachella 2018.