Ask yourself, what would your beloved like as a birthday present— an expensive materialistic gift or something that’s been made by your own hands? We are sure Alia Bhatt asked herself the same question and chose to prepare a birthday cake for her beau Ranbir Kapoor. Luckily for the ‘Brahmastra’ actor Alia chose to bake his favourite cake for his birthday celebration!

As per pictures, Alia donned an apron and got sweaty in the kitchen as she baked her beau’s birthday cake.

Doesn’t she look adorable in that pink apron while holding up a tray of cake mould and batter! In another picture we see Alia frosting the cake. The picture is captioned with: ‘Most important ingredient to bake a good cake.. keep smiling! If you can’t, lick some of the pastry cream and frosting and smile again! (sic) 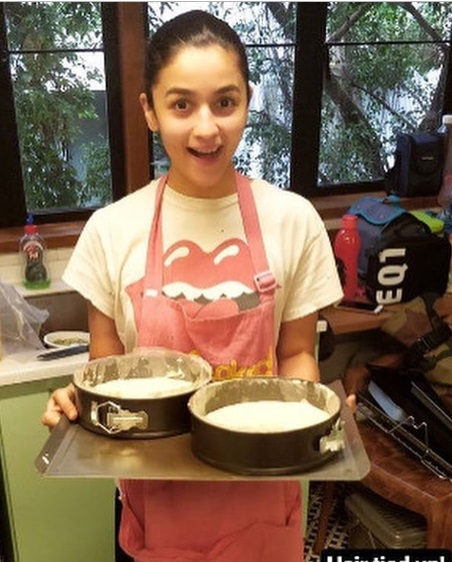 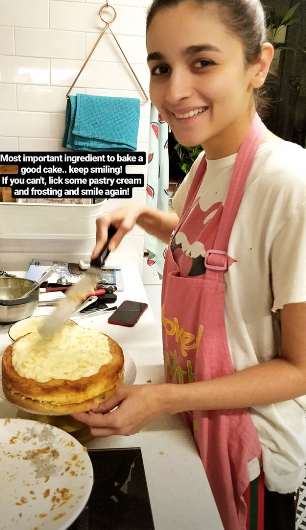 This is not all, Alia even wished Kapoor Khandaan’s chirag by calling him her ‘sunshine’ on Instagram by posting a very candid picture of the actor.

Happy Birthday Rockstar ! In that vein wish you rocking year and a fabulous day ??????????

While most of us were hoping that Ranbir Kapoor would celebrate his 36th birthday by hosting a grand bash that would bring the Kapoors and the Bhatts together. However, walking on his cousin sister Kareena Kapoor Khan’s footsteps, Ranbir chose to celebrate among his close friends in an intimate celebration.

Here take a look at some of the inside pictures:

0 0 0
Previous : Did You Know Taimur Ali Khan’s Nanny Earns As Much As The Prime Minister?
Next : Gwyneth Paltrow and Brad Falchuk Are Married! Steven Spielberg, Cameron Diaz Attended