Celina Jaitley, who has currently taken a break from work, is pegnant with twins again. Yes, the ‘No Entry’ actress is expecting twins with her husband Peter Haag, and her delivery is due in October this year. The Bollywood diva, who is far away from media and glamour world, is all set to embrace motherhood once again.

In March 2012, Celina Jaitley and her Australian based businessman and an hotelier husband, Peter Haag became proud parents of five-year-old twin sons, Winston and Viraaj. Well, the mommy-to-be has entered her second trimester and is shocked to know that she is pregnant with twins again. However, the couple is happy about it. 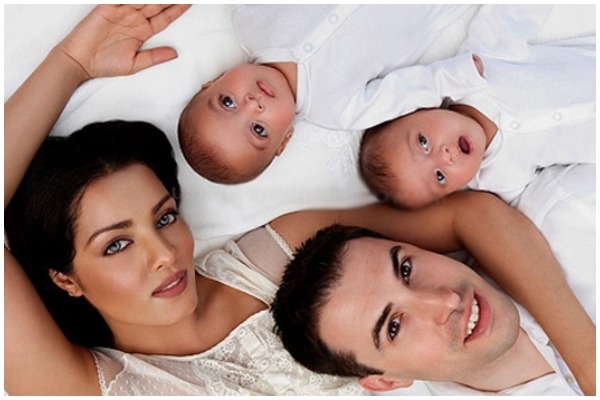 “Doctor was doing ultrasound, and Peter asked the doctor if it is twins this time too. Doctor said yes, and we both were initially shocked,” Celina told PTI in a telephonic interview from Dubai.

The mommy-to-be added saying, “We were exhilarated because the first thing that came in our mind was that we are the chosen one. We are God fearing and we feel God chooses special people to be parents of multiple children.”

Celina also spoke about how the motherhood journey completely changed her life. She said, “My mother always advised me that there is no perfect way to be a mother and father, but there are a million ways to be a good parent. I have always believed there are no rules to be parent. My husband is 100 per cent involved in the pregnancy, and we both take our responsibilities seriously as parents. I feel more patient, complete and sexier than ever. I have more respect for mothers.”

Well, Celina and her husband surely know the challenges they have to go again when their twins are born. We wish healthy and blissful pregnancy days to the actress!

Meanwhile, Celina Jaitley is currently in Dubai and is planning to return back India soon. She will be back to India to shoot for an ad campaign and is also working on a book, which will be out next year.

0 0 0
Previous : What A Bizarre! Sonu Nigam Deleted His Twitter Account After His Last 24 Tweet Rant
Next : WATCH: Priyanka Chopra Slams Wendy Williams That Her Friend Megan Markle Is Not Just Prince Harry’s Girlfriend But Actress Too!