Tusshar took a bold and out of way decision to become a single parent of his son. Tusshar Kapoor becomes proud single dad of Laksshya through IVF and surrogacy. The announcement from the little champs dad on  twitter became the twirling headlines as no one was expecting this surprise. Well, we are really happy for Tusshar taking such bravo step and responsibility of his son who is been named as ‘Laksshya’.

I proudly announce the arrival of my son, a baby boy, born last week through IVF and surrogacy.… https://t.co/LW7rZ0dfOz

Tushar also said –  “I am thrilled to be a father! The paternal instincts in me have been overpowering my heart and mind for some time now. Therefore, I am thrilled beyond words to have Laksshya, now the greatest source of joy in my life. By the greatness of God and the excellent medical team at Jaslok, parenthood is an option for many, who choose to be single parents”

Yesterday, Tusshar also had a first press meet after becoming a father , wherein he said –

“I wanted to be a father. I met Dr. Firuza Parikh and she suggested this procedure. I was in a hurry to become a father.. I am turning 40 in a few months, so I felt I was in the right stage to become a single parent and I went ahead with what was told to me. I am happy that I have taken the right decision. Our family is complete now, we are five now, grandparents, me, my sister and little Laksshya. I wanted to be a single parent, my dream has come true. My son looks exactly like me, so it makes me very happy. I have no words to express how excited or joyous I feel right now. It’s just your paternal instinct when you feel mentally that you are ready to become a father… Lot of people adopt, but I didn’t want to adopt, I wanted to have my own child”.

Grandfather Jeetendra Kapoor with his grandson Laksshya shared with us the very first pic, where the duo are seen adorable. 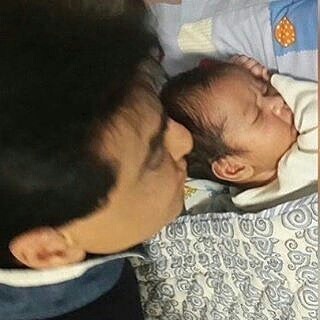 We have Bollywood stars like Sushmita Sen, Sandeep Soparkar who are a single parent and have adopted kids in the past, but actor Tusshar becomes the first to have through IVF and surrogacy.

We are happy for Tusshar and congratulate him for the arrival of new bundle of joy.

0 0 0
Previous : Whoa! How Many Crores Did Priyanka Chopra Charge To Perform at IIFA2016
Next : Divyanka Tripathi and Vivek Dahiya’s Fairytale Pre-Wed Shoot